Ballaseyr Royale to Retire to a New Career as Brood Mare 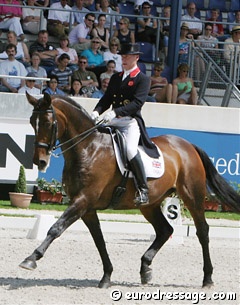 Richard Davison’s Olympic ride Ballaseyr Royale is to retire from international competition to a new career as a brood mare and will be put in foal to the KWPN stallion Lingh, the winner of the Grand Prix at the Las Vegas World Cup Final and Dutch Dressage Championship. Royale will be inseminated this week by Dutch vet Eric Klaui at the Pool House Equine Clinic in Lichfield using chilled semen.

Owner Gwendolyn Meyer discussed the plans with Richard whilst at the Athens Olympics last year and Ballaseyr Royale, a 15-year old Danish bred mare by Picandt, will remain at Richard’s yard, where what’s being called ‘the easibed nursery’ has already been built for her.

Richard and Ballaseyr Royale became known as Britain’s team ‘anchor’ after having produced so many reliable international performances. As well as the Athens Olympic Games, she was also a key member of the bronze medal winning team at the European Championships in 2003 and The World Equestrian Games 2002. 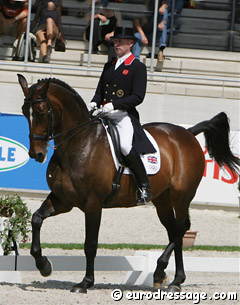 Richard and Royale became National Champions in 2003 and were well placed in the World Cup Final in Gothenberg in 2003. This year Royale competed in several World Cup qualifiers throughout Europe.

Richard says of Royale, “It’s been an absolute privilege to ride her. She’s a really strong character and tries every time. Any mistakes in our performances were always mine, never hers. Gwendolyn lives in the USA and has had very little chance to personally enjoy all Royale’s successes. Her support therefore has been amazing and her decision to leave Royale with us in the UK is very touching.”