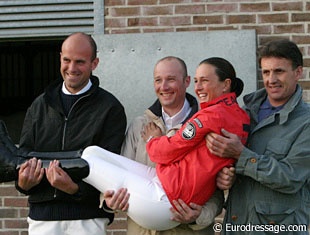 The Belgian Dressage Committee has announced the official Belgian
squad that will be sent to the 2005 World Championships for Young
Dressage Horses, following a selection trial at Domaine Mon Souhait in
Braine L'Alleud on Tuesday June 7, 2005.

Their final pick for Verden is:

A complete report on the selection trial, with photos, will appear on Eurodressage tomorrow.