Anky van Grunsven, Star of Holland for the 12th time 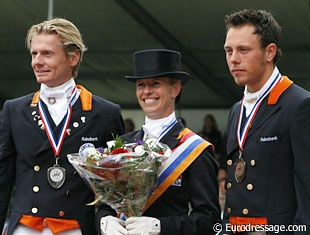 Anky van Grunsven has become the Dutch national dressage champion for the twelfth time in her career and continues to be the absolute star rider on the Dutch dressage scene.

Aboard her Hanoverian gelding Salinero (by Salieri x Lungau), van Grunsven rode a new world record of 87.00% in the kur to music and confirmed her absolute reign in Holland.

Edward Gal finished in silver medal position after three lovely rides on his freshly licensed KWPN stallion Lingh (by Flemmingh x Columbus). Revelation of the show was, without a doubt, bronze medallist Laurens van Lieren. The 23-year old former Young Rider got the maximum out of his own bred Hexagon's Ollright (by Rubiquil x Zeoliet) and stormed to a third place in the overall ranking. Besides the bronze medal, he immediately landed a spot in the Dutch team for the 2005 European Championships in Moscow.

Though the crowd cheered the most for Laurens van Lieren, it was Anky's kur "L'Esprit Chanson" that stole the hearts of the judges once again. The movements were no longer exactly to the rhythm of the horse, but it was still the nicest ride of the day. 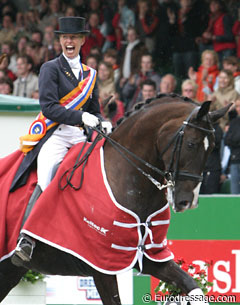 There were no big mistakes in her freestyle ride, just a few minor imperfections. A small hiccup in the single changes, the extended trot a bit held back and Salinero pushed a little on the bit in the tempi's, but overall these were just tiny details in a ride that showed much progress since the Olympic Games. Salinero no longer dramatically opened his front legs in the piaffe and in general he was light in the contact.

"Today I had the best feeling ever. I am finally getting to know him," Van Grunsven commented. "Despite some tension, he remained loose in the body."

Anky winning her twelfth national title seemed a normality to many, but after the Grand Prix on Friday, some doubt arose. Van Grunsven finished second in the Grand Prix with 75.166%, while her student Edward Gal was 2% ahead of her with 77.416%.

"It seemed like people were actually hoping for me not to win," Anky said. "He [Salinero] was too tense on Friday and the weather wasn't at my side. I rather have 40° outside than rain. On Saturday there were too many little things that weren't good, but on Sunday I had the best ride so far. I know I can still do better, but at the moment this is the best he can do. It really felt like an 87%," she said with much pride. 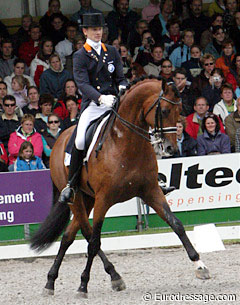 Last year's winner of the Championships, Edward Gal, now received the silver medal. On Friday, Gal won the Grand Prix with an impressive 77.416% but couldn't hang on to that pole position in the Special. A mistake in the tempi changes every single stride pushed his score down to 75.00%. His kur to music, however, earned him an 82.275%.

"I'm not disappointed that I got the silver," Gal commented, "He went super on Friday and I wanted to hold on to that, but in the Special I couldn't get it done and just rode a safe test, while I really went for it in the Grand Prix. In the kur I had some tension in the changes."

The bay stallion Lingh didn't show enough overtrack in the extended walk and had his mouth open several times in the test. He didn't look as fresh and brilliant as we are used of him, but nevertheless he still shone in the ring. The trot half passes were incredibly steep and the piaffe remains to be a highlight movement of this horse.

More highlights came from Laurens van Lieren and Hexagon's Ollright. The duo rode to music of Queen and had a very high technical difficulty level with tempi changes on the circle. The piaffe and passage were balanced and rhythmical and especially the extended trot was breath taking. "Me and my horse performed at top level today," Van Lieren explained. "Everything went right and we were riding well to the music. I really enjoyed the ride." 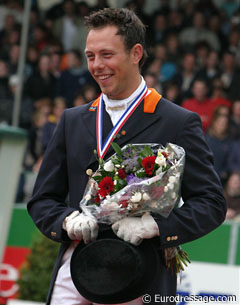 With three riders scoring in the low and mid seventies in the Grand Prix and over 80% in the kur to music, Holland will probably be sending its strongest team ever to the European Championships in Moscow.

"The numbers 1-2-3 for the team are very clear to me," Chef d'Equipe Sjef Jansen said. "Both Salinero and Lingh have been competing much lately so they will take it easy now. For Laurens we have to lay out the right path. Now that he's scoring so high, he has to select his international shows really carefully."

Jansen has four to five other riders in mind who have a chance for the fourth place on the Dutch team. He is thinking of Sven Rothenberger, Imke Schellekens (who unfortunately had to withdraw from the kur because her horse was slightly uneven), Kirsten Beckers, Anne van Uytert and Stephanie Peters.

Jansen confessed not having seen all the rides in Nijmeghen "because I was busy with my students," but he is certain that "we can send a team with three top horses." He will announce the official Dutch team for Moscow on June 28. 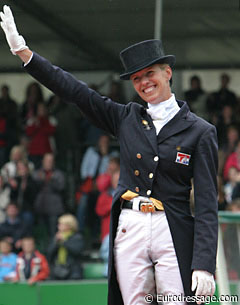 The city of Nijmeghen hosted the Dutch Dressage Championships for the tenth time this year and announced that they will hand over the organization to Eindhoven next year. The organizing committee was extremely happy with the 10th edition as it produced top quality sport, a record crowd of 15,000 people attending, and a new world record score in the freestyle.

It is no surprise that a complete Dutch judging panel floats its Dutch riders at the Dutch Championships - the Germans do the same at their national championship - and the slogan "Floating Dutchmen" sprang to mind, when one saw one monster score after the other digitalize on the score board.

Nevertheless, the 2005 Dutch Dressage Championships was an absolutely fun show to watch with lovely horses and wonderful rides. "It were the best finals ever," judge at C Ghislain Fouarge said. "Laurens van Lieren was a revelation. Even the junior and young riders rode extremely well, which means that our future is secured."

Though the competition is breathing in her neck, Anky van Grunsven is very pleased with this development in the sport. "This is good for the sport. We need young people who make it more exciting. If someone is better than me, than so be it. Only like that the level of competition can rise," a very level headed Anky said.

Reigning Olympic gold medallist, van Grunsven wishes to ad another gold medal to her collection at the 2005 European Championships in Moscow. Her strategy for the Championships involves concentrating on the basics.

"I'm going to do a lot of training on the basics. I only have Salinero since 2001 so we never had a big build-up phase. There is always something happening. I break my leg, I have a baby, and then Sjef rides him and I'm not allowed to go on him," Anky joked. "I want to have him lighter to the aids and in the contact. And he has to learn to halt! He does it in the warm up and at home, but not in the ring."

Van Grunsven publicly stated that her goals are achieving 80% in the Grand Prix and 90% in the Kur. Watch out Martin Schaudt, and Edward Gal!!