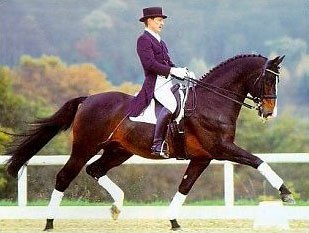 The Holsteiner breeding stallion Cheenook passed away last weekend after a severe colic attack. The bay stallion by Caretino out of Trika (Romantiker x Herbstglanz) underwent colic surgery, but couldn't be rescued. He was humanly put down.

The 17-year old Cheenook was mainly a show jumping oriented stallion, though he got to breed to many dressage mares as well. He did his Stallion Performance Test in Medingen in 1991 and finished third. In 1999 he got his first son, Coco Cavalli got licensed in Oldenburg. His most famous offspring are jumpers Cyrenaika FRH, van Schijndel's Cindy, Centrio, Calgary, Condor and Cassiopeia.

Under Olivier and Katrin Luze, Cheenook competed at Prix St Georges level and was trained at Grand Prix level in dressage.