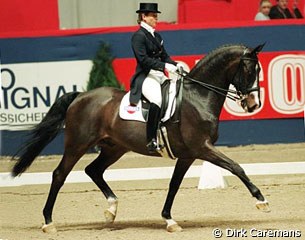 Though the 2005 World Cup Finals officially kick off on Thursday April 21, 2005, for the dressage riders it has already started behind the scenes with the vet check on Tuesday April 19, 2005.

The vet check is a formal occasion where all horses are presented in hand to the panel of judges. They are checked for any apparent lameness and if a horse is unsound, he will not be allowed to compete.

In Las Vegas, all horses passed the jog on Tuesday, except one: Isabell Werth's 19-year old Antony FRH. The dark bay Hanoverian gelding will be presented for re-inspection at 6 AM on Wednesday. If he doesn't pass it, the World Cup Finals are over for German Isabell Werth.

Werth qualified both Satchmo and Antony FRH for the Finals in Vegas, but decided to fly over Antony for his final international competition before his official retirement.