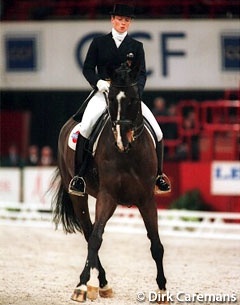 , but the horse still had a chance today as he would be re-inspected at 6 AM.

However, after a short ride this morning, Werth decided not to present Antony for re-inspection. This means, of course, that Isabell Werth will not be competing at the World Cup Finals and her vacant spot can not be filled by another German rider. So far it is unknown who will take over Isabell's ride.

Werth qualified two horses, Satchmo and Antony, for the Finals, but decided to take good old Antony (by Argument/T) to shine with him one last time before his retirement. Germany still has two more riders on the scene in Vegas: Hubertus Schmidt with Aramis and Ann Kathrin Linsenhoff with Renoir Unicef.