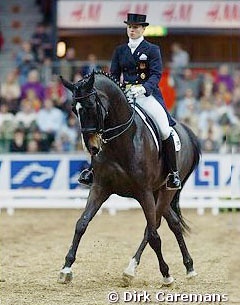 (by Argument/T) to Las Vegas for their final competition as a pair.

Werth has announced Antony's retirement after the 2005 World Cup Finals but she hopes to accomplish one final show climax with her dark bay gelding before that. "The oldie and me are heading towards gamblers' paradise," Werth chuckled. "I have considered it carefully whether I should put him through that long journey, but he's still daily proving me that he's fit as a fiddle." The World Cup Finals will be Antony's final show before the official retirement ceremony at the German Dressage Championships in July in Verden, the city where he was initially bought by Dr. Uwe Schulten Baumer.

Werth is very much looking forward to the World Cup Finals. "It takes about 15 hours to get there, but the long trip has one advantage; in the air plane I finally have a couple of hours to relax: no phone calls, no deadlines," Werth confessed. "Of course as soon as the plane lands, everything will be hectic again: groom the horses, find the hotel, check out the show grounds."

The Grand Prix, the first phase of the World Cup Finals, is on Thursday April 21. The Kur to Music will be ridden on Saturday April 23. "Of course I will check out the city as well," Werth said, "and I've been told that I have to play the slots. It'll be Viva Las Vegas for me."

Tune into Dressagedaily/Horsesdaily's extensive "On the Scene" coverage of the 2005 World Cup Finals with daily articles, scores and photos.