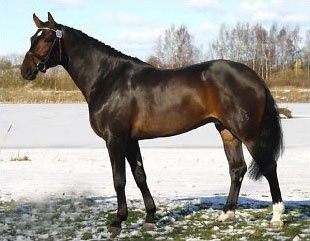 Figaro R is the Champion of the 2005 Swedish Warmblood Stallion Testing which took place February 27 to March 6, 2005 at the National Stud in Flyinge, Sweden. Bred by Michael Schenk and owned by Rose Mathisen and Gransbo Stutteri, Figaro R is a dark bay colt

The dressage bred stallion Figaro R consistently got impressive marks from the judges, except for show jumping for which he failed. He scored 9 for type, 9 for trot, 10 for canter and an overall 8.8 for gaits under saddle. Furthermore, the two test riders Hella Kuntz and Heiner Sudowe both gave him a 10 for rideability, which is unprecedented. Figaro R was already a premium colt at the Hanoverian Licensing in Verden, and now he is the test winner for the Swedish Warmblood Society.

"He could have been prepared better for show jumping," the Swedish Warmblood Society stated, "but in freedom he moves with much elasticity. His trot shows much candence, but could be a bit more engaged at times. His canter is well balanced with a very strong, reaching hind leg." The test riders also were very pleased with the feeling this stallion gave them "He's very steady in all three basic gaits. He's extremely alert to the aids and there is a perfect contact with the mouth. He's a dream horse to train," Kuntz said.

The second best index of 21.3 was achieved by Hermes, a chestnut Rambo x Urbino x Indus offspring, owned by Ann and Thorsten Pehrsson. Hermes scored 8.6 for his gaits under saddle, getting 9s for his walk and trot. Third place went to Brisbano, a Briar x Amiral x Idealist son, who got an index of 21.0 but was approved with dispens, since he did not fulfil the requirements in type, but had very good gaits anyway. 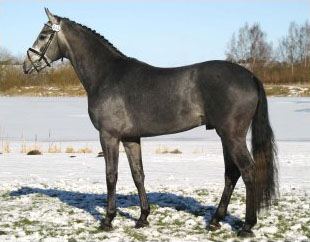 Also licensed was the dapple grey stallion Channon (Rubignon x Mazarin x Good Future), who is owned by Harald Prince. Channon scored mainly 8s for his in hand presentation and 8.5 for his gaits under saddle (with 9s for walk and canter). "The judges thought he was an elegant, correct and complete horse with a great temperament and high rideability. They said he had three very good gaits with lot of "schwung" and he was working correct from behind every day they saw him," the proud owner Harald Prince told Eurodressage.