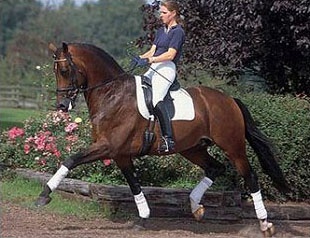 KWPN breeding stallion Hilltop Rousseau has officially moved to Stallion Station Pape in Hemmoor, Germany, where he will be standing at stud and be trained by Susan Pape-Draper.

Rousseau (by Ferro x Roemer) will still be available on the Dutch market through Piet Kuypers, who managed Rousseau's breedings the past three years.

"Hengststation Pape will be Rousseau’s new home base, where Ingo and Susan Pape will continue his training and breeding management," Susanne Hassler of Hilltop farm said.

Even though Rousseau is only seven years old, he has already built up a remarkable career, which started by him being the price highlight of the 2001 KWPN Select Sale stallion auction. Under Dutch dressage rider Nicolette van Lierp he then became the 2002 Pavo Cup Champion in Holland and the 2003 Reserve world young horse champion in Verden, Germany.

"We wish to thank Nicolette von Lierop for her endless passion and dedication to Rousseau over the years," Hassler said. "Her wonderful care and commitment to Rousseau was vital to his early success as a stallion."

In 2004, Rousseau got a mouth infection and could unfortunately not participate at the 2004 World Young Horse Championships. That same year, Austrian dressage trainer Ernst Hoyos trained Rousseau at his home base in Meppen, Germany.

For 2005, Hilltop Farm has made some major changes in the management of their Dutch stallion. By standing at stud at Ingo Pape's, Hilltop aims to penetrate the German breeding market more, as Rousseau is approved for Hannover, Oldenburg and Westfalia.

"We consider ourselves very lucky to have such great American friends, who confide in us," Susan Pape said. "Without them we would not have Hilltop Rousseau. He amazes us every single day in his training. He has such dynamic gaits we've seldom seen."