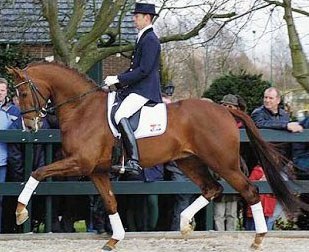 Holland's leading young horse rider Hans Peter Minderhoud held a tight grip on the entire Goes show by winning all three divisions in the fourth leg of the 2004-2005 KWPN/KNHS Stallion competition in Goes, The Netherlands.

At First level (L-level), Minderhoud and Sandreo (by Sandro Hit) charmed the judges with his 8.5 scoring canter and 9.5 earning general impression. Judge Rien van der Schaft commented that Sandreo could have scored more than a 9 for self carriage if he had shown a quicker hind leg in the trot. Kim Leduc and Trento B (by Krack C) continue to improve show after show. Scoring 9.5 for self carriage and general impression, the duo placed second. Minderhoud and Tango (by Jazz) placed third (pictured right).

KWPN breeding expert Dirk Willem Rosie claimed that world Champion Florencio (by Florestan) and Scandic (by Solos Carex) are equals in trot, canter, self carriage and suppleness, but it was Florencio who took the lead because of his better walk. According to Eurodressage, Florencio is a far superior young horse to Scandic. Florencio and Minderhoud won the M-level class (Second level) and Scandic placed second under Remy Bastings. Edward Gal and San Remo (Wolkentanz I x Volturno) finised third.