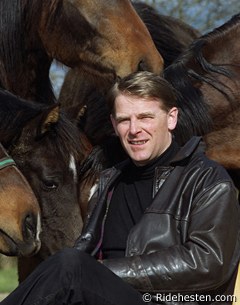 On January 3, 2005, the WBFSH president Jan Pedersen celebrated his 50th birthday at his home in Arden, Denmark, along with his re-election as president of the World Breeding Federation of Sport Horses, which took place mid December 2004 in Mexico.

Since 1999, Jan Pedersen has been president of the WBFSH, an organization which encapsulates 52 breed societies in 25 countries and which has its main office in Vilhelmsborg, Denmark. Thanks to his re-election, Pedersen will remain in charge of the organization till 2006. Patron of the WBFSH is Princess Benedikte of Denmark.

Pedersen's 50th birthday was celebrated yesterday in the presence of his wife Bodil and two daughters, Julie and Matilde, along with many friends and family members.

Besides his WBFSH presidency, Jan Pedersen is also the leading man of the Danish Warmblood society. Pedersen has 12 horses in his own barn and has been interested in horses since early childhood. At age 10, Jan convinced his father to buy him a horse. They purchased a mare and rented a box at the outskirts of the village. Pedersen's passion for horses continued to develop and soon they built their own barn, which they filled with Oldenburg horses. 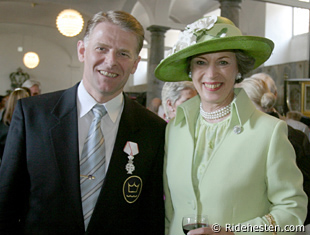 Jan Pedersen got involved in the "Danish Oldenburg Breeders" society and became a writer for their newsletter "Oldenburg News". Jan started his career in the Danish Warmblood society as a speaker at stallion licensings together with I.C. Christensen and Lars Anthony. Pedersen became president of the Danish warmblood society in 1994. He helped move the national equestrian center from Skejby to Vilhelmsborg. Today, the Danish Warmblood Society is an independent breed society with a young breeders' department and a revenue of 14 million Danish Kroner.

Jan Pedersen has become a Knight of the Danish Flag (Ridder af Dannebrog). His biggest breeding success to date is winning a Gold Medal with his own bred mare Andorra (Elite Mare Status).