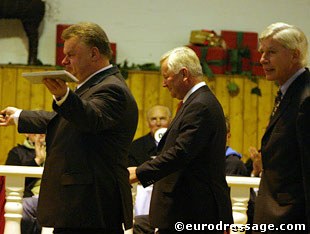 At last year's P.S.I. Auction, dressage diva Poetin stole the show by becoming the top selling horse for 2.5 million euro. This year, it was a show jumper that became the price highlight at the 2004 P.S.I. Auction in Ankum, Germany, on December 12, 2004.

An Asian jumping rider purchased the bay Holsteiner gelding Quin Chin (Quantum x Campione) for 1,200,000 euro. Quin Chin, who became the 2004 World Young Horse Show Jumping Champion in Lanaken, Belgium, will stay at Paul Schockemohle's in Muhlen for further training. Second most expensive jumper was Coster, the 2004 Bundeschampion in the 5-year old division. The gray licensed Holsteiner stallion has found a new owner in Mexico, who purchased him for 700,000 euro.

Price highlight of the dressage collection was the licensed Oldenburg stallion Santa Cruz (Sandro Hit x Calypso II). Auctioneer Uwe Heckmann struck his hammer on the bid of 750,000 euro. An American dressage enthusiast, who wishes to remain anonymous, acquired this beautiful stallion. Santa Cruz will stay in training at Hof Kasselmann in Hagen, Germany, for another year to be schooled to Prix St Georges level. After that the owner will decide when to import him into the States. 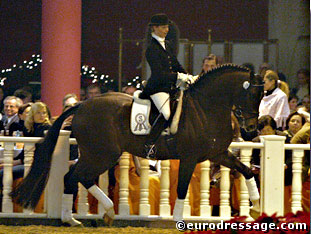 Even though Santa Cruz fetched the top knock down price, it was the 3-year old chestnut mare Damenwahl who stole the hearts of the crowds at the PSI auction. This ravishing Oldenburg mare finished third at the 2004 German Young Horse Championships and became Oldenburg Regional Champion under Eva Möller.

Damenwahl (Donnerhall x Weltmeyer x Rubinstein) was probably the best quality horse in this year's PSI dressage horse collection. Her sales price reflected this as well. Selling for 700,000 euro, Damenwahl has been purchased by a Swiss couple, but they will keep the mare in training with Ilona and Christoph Niemann in South Germany. 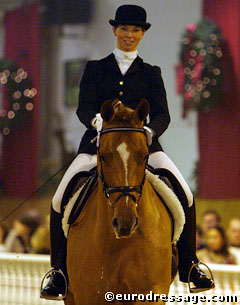 The wonderful Oldenburg mare Louisiana sold to France for 420,000 euro. This Baden Wurttemberger branded mare by Lord Sinclair x Romino will be schooled by Philippe and Marina Van den Berghe in the future.

The 2004 P.S.I. Auction in Ankum, which celebrated its 25th jubilee edition, produced a total turnover of 11,8 million euros. The dressage horses were good for a total of 4,9 million euro and an average price of 205,625 euro per horse.

Back to the 2004 PSI Auction Index