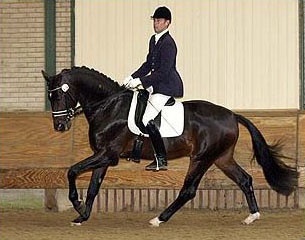 Judges Diederik Wigmans and Johan Hammingo were charmed by this dark bay stallion. Johan Hammingo, who was guest judge rider, placed Game Boy, who is by Gribaldi x Pion, first in the VSN Trophy with a score of 9.5, saying afterwards that, "of all the horses that I have ridden in my life, there are only few which had such a fantastic canter."

The purse attached to the VSN Trophy is meant to stimulate breeders and owners to breed and buy top quality dressage horses. Game Boy's owners Joop van Uytert and Rinus de Jong earned a fat check and Game Boy's breeder C. Harthoorn received 2,400 euro as a breeder's reward. Game Boy is registered in the NRPS studbook under the name Garbaldi. It is the second consecutive year that a Van Uytert horse has won the VSN Trophy. In 2003, the mare Terlia was the winner.

Placing second in the VSN Trophy was Uivertje Ruta, a Jazz x Boy B offspring. The black Urchin (Sunny Boy x Jazz) was the prognosticated winner of the trophy, but was not rideable enough under guest judge rider Hamminga