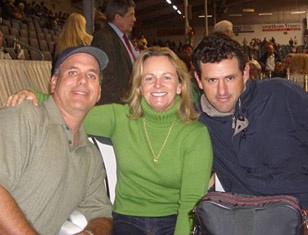 Double American Olympic team alternate Kathleen Raine has rekindled her inner Olympic flame with the purchase of the Hanoverian mare Brentana at the 2004 Elite Winter Auction in Verden, Germany.

A newby to the auction scene, Kathleen's husband David Wightman accompanied rider and friend Mark Carter in his search for a new equine partner, not expecting to find that "special horse" he and Kathleen had been looking for for years. The tall bay mare Brentana (by Brentano II x Weltmeyer x Argentinus) was ridden at the Auction Gala Evening by Debbie McDonald and dazzled every single person in the crowd, including David and Mark. It was love at first sight.

"The first time I saw Brentana I fell in love with her," David Wightman said. "I liked the way she carried herself, her size -- she was big enough for Kathleen -- her gaits are elastic, comfortable to sit on and there is nice contact to the bridle. I liked her breeding and temperament." 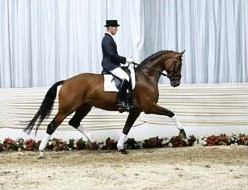 After the try-out, David knew for sure that Brentana was a good match for Kathleen, but the deal was not yet done. At auctions, you never know who you will be facing in the bidders' duel. "I was extremely nervous, I thought her price would go too high for us," Wightman confessed. Fortunately, Wightman and Raine received the generous help from Dr. Jennifer Mason in the purchase of Brentana. Brentana became the third highest priced horse at the 111th Elite Auction in Verden. "With respect to Perry and Peggy Thomas's Brentina, Kathleen and I have decided to change Brentana's name to Breanna," David explained.

David and Kathleen Wightman-Raine are both international dressage riders, Kathleen being the Olympic team alternate with Avontuur in 1996 and with Fidelia in 2000, and David having competed Partous at the 2003 World Young Horse Championships in Verden. The Californian couple are high school sweethearts so to speak, getting together while competing on the same young riders' team at the North American Young Riders Championships. 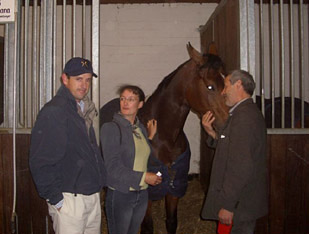 Both of them will be showing their current horses at FEI level in the 2005 show season. "I am riding Partous (7- years old) and he is now ready to compete at P.S.G. and Intermediaire I," David explained. "Kathleen is very excited to start Lord Glendale (11-years old) in the Grand Prix. Glendale's piaffe took a little time, but now it has really developed and Kathleen now feels he is ready to start showing."

With Breanna, who officially is registered as "Brentina" with the German Equestrian Federation, Kathleen has a strong international prospect added to her horse collection.

Despite the apparent qualities and talent of the horse, Wightman assured that the mare will not be pushed to perform. "Our future plans with her are for Kathleen to bring her along for the long term," David said, "We hope to bring her along at her own pace and hopefully she develops into an international horse" 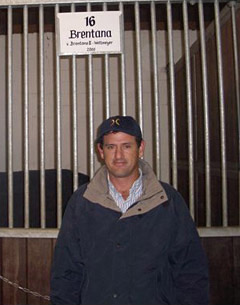 Breanna has arrived in the U.S. mid October 2004 and has been given a break after all the auction stress in Germany. "We will let her wind down a little, and then start all over with her," David said, "we want to be sure she is comfortable. No pressure, no big expectations."

If all goes well, Kathleen will be back on the scene in a few years with Breanna, retracing (and going beyond) the footsteps of Avontuur and Fidelia. "We feel extremely lucky to have been able to get her!," David concluded.