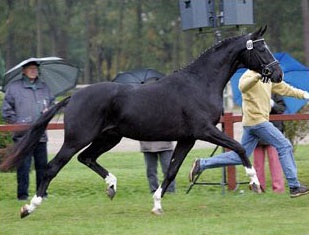 At the 2004 Hanoverian Stallion Licensing in Verden, Germany, the dark bay colt Dancier (by De Niro out of St. Pr. St Lacarna (by Lancier x Espri)) became the 2004 Licensing Champion.

The extravagantly moving De Niro son, who is bred by Ekke Thaden and presented by Geert Brinninkmeyer, excelled in his conformation and movement and was the deserved number one. At the auction following the licensing, this champion was sold to the Landsgestut in Celle for 330,000 euro. "Stallmeister" Dr. Burkhard Bade bought seven stallions in total for the Landsgestut.

The Reserve Champion of the licensing was a Don Frederico x Pik Bube I x Matrose offspring who impressed with suppleness and dynamics in his movement. This stallion, who was bred by Horst Ebeling, became the price highlight of the auction, selling for 440,000 euro to Gestut Famos in Wachendorf, Germany.

Never before has a Hanoverian Licensing been so successful as the 2004 one. 71 stallions out of a collection of 106 were licensed, 19 of them got the premium label. The Hanoverian stallion committee considered this year's young stallions of extraordinary quality. "It is striking that stallions such as Contendro and Don Frederico, who presented their first crop of youngsters here at the licensing, were so much in the buyers' demand," the Hanoverian Verband stated. All seven Don Frederico's presented at the approval have been licensed.

69 stallions in total were auctioned after the licensing and they achieved an average price of 52,000 euro. Seven stallions sold for more than 100,000 euro. Amongst them was the third best selling horse and the runner up (2nd reserve champion) of the licensing, a Sandro Hit x Lanthan son, who got sold to Americans Doug and Louise Leatherdale for 260,000 euro. This young stallion will join His Highness at Jens Meyer's stud farm in North Germany. The other licensed Sandro Hit colt, out of a Goldstern x Mon Fils xx dam, got sold for 220,000 euro to Gestut Famos.