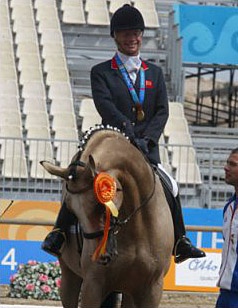 Deborah Criddle (GBR) followed in the footsteps of her countryman and fellow team member Lee Pearson.

Criddle prevailed in the Individual Freestyle test in Grade III and won her second gold medal at these Paralympic Games.

"I am really surprised with the marks I have been given," Criddle said. "They are very high but this is not a personal best for me. I have reached 84% in the European Championships in Portugal two years ago. I didn't expect to do that good, because I was nervous. I didn't have time to set up the horse due to the fact that the music started quickly.

The British rider put on a great show in the afternoon session at the Markopoulo Olympic Equestrian Centre and with 81.722% topped the competition with a huge margin to separate her from second-placed rider Bettina Eistel (GER).

The German rider, bronze medallist in the Individual Championship, was the leader until half way through. Eistel had a superb programme, receiving 77.778% by the judges, in a test she later described as the ride of her life.

Bert Vermeir (BEL), after suffering a drama on Tuesday when he just missed out a medal, won his first-ever Paralympic medal, a bronze. The Belgian rider was awarded 74.722% and left Marita Hird (AUS) in fourth place.

"Today I did a lot better than in the Individual Championship," Vermeir said. "There were some mistakes, but luckily they didn't cost much and I was able to correct them."

Germany's Bianca Vogel, the silver medallist in the Individual Championship and Criddle's main rival before the competition started, failed to finish her programme. She didn't feel well in the middle of her test, and despite the fact that her coach urged her to conclude her programme, she elected to abandon her effort.

Lee Pearson (GBR) outclassed his own previous perfomances in the Individual Freestyle Test in Grade I.

The judges were thrilled by his magical programme and awarded him an amazing 87%. This was a record-breaking test by the British rider who earned his second gold medal in the Athens Paralympic Games and the fifth overall in his incredible career.

"It couldn't be better that what we did today," Pearson said. "I don't think I've ever got higher marks than 85%! I'm very pleased with my horse. He did an excellent job. I did the ride of my life! I want to thank my trainer who told me to ride Blue Circle Boy strongly."

Pearson, a Leek resident, was the last to execute his programme, but when he went out he was the person of the day. He performed after Lynn Seidemann (USA), who was in the lead at that point of the competition.

Seidemann earned the silver medal, which is her first ever in Equestrian. She has already won one silver in Barcelona in 1992 in Women's doubles in Wheelchair Tennis. She now joins an elite group of athletes, who have stepped on the medals podium in different sports.

Seidemann (USA) got almost eleven points (76.063%) behind Pearson, but it was good enough to award the Texan athlete second place in the competition. "It was a good test," Seidemann said. "We did a lot better than the Individual Test. My horse was great today."

Jan Pike (AUS) delighted her fellow countrymen with another solid perfomance. Riding DR Doolittle, she gathered 74.375% to take the Bronze medal to match with the Silver she got in the Individual Championship.

The most heartbreaking incident of the morning session at Markopoulo Olympic Equestrian Centre was the participation of Valerie Salles (FRA). She is the rider whose horse Arestote suffered a heart attack and died on Tuesday. Salles was allowed to participate out of competition, when all the other riders had concluded their programmes. The French team borrowed Doonsquire Express from Brazilian rider Marcos Alves. Salles received a standing ovation from the crowd and left the arena with tears in her eyes.

Judi Island (CAN) didn't take part in the competition. During her warm-up in the training arena her horse Whirlwind threw her down. She was taken to the athletes' medical tent in an ambulance but according to the Canadian team she didn't suffer any serious injury.

Ann Cathrin Lubbe (NOR) captured the gold medal in the Individual Championship, competing in Grade IV.

The Norwegian rider went one better and improved on her performance in Sydney, where she had won silver in the Individual Championship and the bronze in the Team event.

Lubbe riding Zanko was the only participant who passed the 70% mark and by amassing 70.839% went to gold medal position and stayed there until the conclusion of the event.

"I'm satisfied with the marks I got, though it's not the highest result of my career," Lubbe said. ""Zanko was a little tight and nervous. I' prefer him being more calm."

The 33-year-old rider sent a message on Monday to her rivals that she is the woman to beat in this competition. In the warm-up phase she took first place with a commanding lead over the others. In fact, Lubbe is the only gold medal winner who has topped the warm-up session.

South Africa's representative, Philippa Johnson, won her first ever Paralympic medal. The South African champion, who lives and trains in Belgium for the last years, produced a solid performance and grabbed the headlines at Markopoulo Olympic Equestrian Centre.

The judges awarded her 69.871% for the execution of her programme with Burgmans Benedic.

"I am very pleased with my perfomance," Johnson said. "My main goal before I came here was to finish in the Top 5. I believe that with the marks I have been given by the judges, I will achieve my target."

Former Eventing champion for Canada, Karen Brain, in her first Paralympic outing, will return home with a bronze medal in her luggage.

The Canadian rider gained 69.677% and overcame by a small margin of points the defending Paralympic champion Jayne Craike (NZL). The latter was awarded 69.484% by the judges.

Deborah Criddle (GBR) added the Paralympic Gold medal in Individual Championship to her illustrious collection of silverware. The British rider was victorious in Grade III, as she was awarded with 74.400% by the judges for her programme.

She is the now the current Paralympic, World and European Champion in her Grade.

"I'm really pleased with my performance as well as with my horse’s reaction," Criddle said. "At the beginning of my career in these games, I used to be very nervous but as years went by I overcame it. I've learnt to control my strain and that helps me a lot."

The spectators that visited the Markopoulo Olympic Equestrian Centre today and watched the afternoon session witnessed a high-standard competition. The top five riders went over 70% in their marks.

Criddle prevailed ahead of Bianca Vogel (GER), the Silver medallist, who won the first Paralympic medal in her career. The 72.240% mark the German rider received by the judges almost guaranteed her a medal at the end of the day.

""This is the best test I’ve ever done. During my programme I had problems so I had to hold the reins with my mouth in order to control my horse."

Vogel edged out compatriot Bettina Eistel, who finished in third place. Eistel was the winner in yesterday's Warm-Up phase and she was hopeful that she could claim the Gold medal. It wasn't to be though, as she gathered a total of 71.120%. That was good enough to put her in the Bronze medal position and to push Bert Vermeir (BEL) off the medal podium.

The Belgian received 70.960% to finish in fourth place, while Jose Letartre (FRA) got 70.160% to close the top five in the competition.

For the first time in Paralympic history, Greece was represented in Equestrian. Nikolaos Sigkas (GRE), with no experience in major competitions, was ranked 15th with 60.160%. His perfomance delighted the crowd, who cheered during his programme execution.

Irene Slaettengren (SWE) claimed the gold medal in the Individual Championship in Grade II. The 52-year-old Swedish rider had an amazing showing in this mornings' final, beating her opponents by a two-point margin.

The Sundsvall native received a total of 72.636%, good enough to earn her the top prize: her first-ever Paralympic gold medal.

This was the fifth Paralympic gold medal for Sweden in Athens, and the first in Equestrian.

The strongest favourite before the competition, Nic Tustain (GBR), failed to keep up with her compatriots' gold medal expectations. She had to settle for the bronze medal, as the judges evaluated her programme with 68.727%.

Tustain wasn't alone on the third step of the podium. Gert Bolmer, the second Dutch rider taking part in Grade II, reached the same score as Tustain (68.727%). The 21-year-old rider won the bronze in his second Paralympic appearance - in Sydney, Bolmer had claimed the Freestyle Test bronze.

Hannelore Brenner (GER) did not compete in the final because her horse, Fabiola 189, was not fit enough to take part.

Lee Pearson (GBR) defended his Paralympic title in the Individual Dressage Championship in Grade I.

He won his fourth Paralympic gold medal at the opening day of Equestrian Competition at Markopoulo Olympic Equestrian Centre.

The British rider was the second to go and took a commanding lead ahead of the rest of the competitors. Pearson received a total of 77.263% from the five judges and did a faultless perfomance riding Blue Circle Boy

The silver medal was awarded to Australia's Jan Pike. Dr Doolittle, her British Warmblood horse, helped his rider to achieve a total of 71.895%.

There was a lot of drama concerning the rider who was going to earn the bronze medal. Keith Newerla (USA) was holding it in his hands towards the end of competition, but Sophie Cristiansen the incredible youngster from Great Britain had something else on her mind.

With a personal best perfomance of 70% he beat Newerla's marks of 69.684% and gave the Team of Great Britain an unprecented one-three in the medals podium.

A sad incident occured today. Valerie Salles (FRA) was ready to enter the arena in order to start her programme when her horse Arestote collapsed.

Technical Delegate Jonquil Solt issued the following announcement: "During the competition (Individual Dressage Championship Grade I), the horse (Arestote) of the French rider Valerie Salles suffered a cardiac arrest at the entrance of the dressage arena. As a result, competition was interrupted for 45 mins, in order to make the necessary arrangements and give time to the competitors to warm up the horses again."