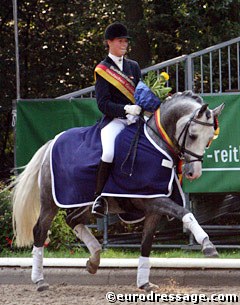 "What a pity," judge Christoph Hess said through the speaker puzzling the crowds. "What a pity this performance is already over," he added then, "this was riding at top level.

This pony suits all superlatives in his basic gaits and were demonstrated almost in perfection. This perfect riding of a 5-year old pony."

The 5-year old Dressage Pony division was won by the dapple grey pony stallion Validos Contrast. Ridden by Lydia Camp, a double team gold and individueal bronze medallist at the European Pony Championships, Validos Contrast was shown at his absolute best. The grey pony trotted with so much power and rhythm, shifting from collection to extension with great ease. The pony had a scopey, uphill canter and a ground covering walk. There was nothing to be remarked on his fabulous movements. 9.5 was his winning score.

"He's a dream," German pony chef d'equipe Cornelia Endres said in a phone conversation. Valido's Contrast qualified for the 2004 Bundeschampionate by winning the L-test at the Rhinelander Regional Championships. He scored a 7.8 there.

The pony qualified for the Bundeschampionate last year, but did not compete there.

Deinhard B and No Angel Take The Silver and Bronze 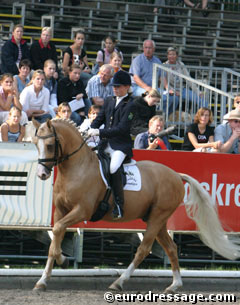 Following in Valido's Contrast's winning wake were the palomino stallion Deinhard B and the bay mare No Angel.

Owned and bred by Ludwig Stassen of Gestut Bonninger in Tonisvorst, Germany, Deinhard B is a brilliant dressage pony. He has such a lovely conformation, and three superb basic gaits, but has a rascal eye and looks like a complicated ride. Sired by European Pony champion Dornik B out of dam by European champion Golden Dancer Deinhard B has the right cocktail of blood and genes to be winning FEI Dressage pony. Ridden by Anne von Negri, Deinhard B showed maximal potential and elasticity in trot and canter. His walk, however, is a bit limited and could have shown more looseness in the body and overtrack. The judges gave Von Negri and Deinhard B a 9.0 which put them in a silver second place.

The bronze medal went to a most charming pony called No Angel, but actually she is an angel. Ridden by the petite Charlott Maria Schurmann, No Angel rode a clean test with no major mistakes in the programme. "This is a very charming pony with a beautiful face and lovely character. She has her ears forward all the time and has a kind eye. Her high rideability makes her extremely suitable for children riders," Christoph Hess commented.

No Angel, who is Westfalian registered and is by Nobelboy x Niklas, has a very good walk and trot. The canter was her weakest gait at the Bundeschampionate, but Hess lay the cause on the rider. "the rider is not routined enough. Her seat does not show secureness in canter. Nevertheless it's an excellent pony with much talent," Hess said. Her score 8.7