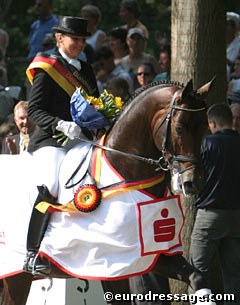 "Harmonie Pur." That is how judge Christoph Hess described Kaiserkult, the winner of the 6-year old division at the 2004 Bundeschampionate. Ridden by Dorothee Schneider, Kaiserkult floated through the arena

excelling in all three gaits and overall harmony with his rider.

"This was correct, classical rider at the best level. The horse was loose and happy in his work, " Hess explained. The judges praised Schneider's riding skills in the transitions, which were fluent, forward and on the hind legs. Kaiserkult was balanced and straight in his body. The only hiccup in the test was the fourth flying change. "It were probably the rider's nerves that took control there," Hess suggested.

The Trakehner stallion Kaiserkult took the lead in the six-year old division with 9.2. He was uphill, light on the bit, forward and engaged in all three gaits and smooth in the transitions. The dark bay stallion was presented in a correct, classical frame in which looseness and self carriage were prevalent.

Kaiserkult was one of the few 6-year old horses which showed good transitions from medium walk to collected walk into the walk pirouettes. Furthermore, he opened well in the frame in the extensions with engagement from behind and nice light footedness. The horse was not the flamboyant stunning mover, who drugs you with his flash appearance (like Poetin did), but he was the most solid top quality 6-year old of the pack at Warendorf this year. 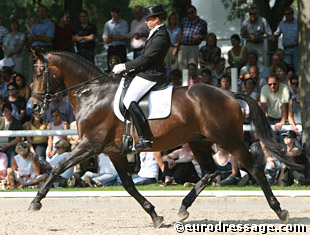 Based in Framersheim, Germany, Dorothee Schneider runs a breeding and dressage stable called Gestut St. Stephan. She bought Kaiserkult, who is by Van Deyk out of a Gajus dam, as a foal from breeder Dieter Heuchert and trained him to this level herself. Gestut St. Stephan is standing the sire Van Deyk.

Of course the German Trakehner Verband is thrilled with the victory of their antler-branded stallion. It's been four years since a Trakehner took first place in dressage in Warendorf. 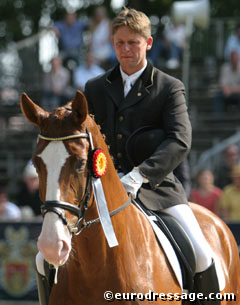 There will be many people who won't agree with the judges (and me) but Wambo is just wonderful. He's not a swan, but nor is he the ugly duckling. This distinctively marked chestnut with blaze and huge stockings beams into your eyes when he flashes by, and he is a tidbit long in the back. He's enormous, powerful and you don't want to get your foot stuck under his hooves.

Wambo moves with so much balance and rhythm, never losing the beat whether he is moving in walk, trot, or canter, straight, in bends or traversal movements. Ridden by Hans Peter Bauer, the Hanoverian registered Wambo (by Walt Disney x Espri) showed great self carriage and swing in his body. His flying changes were the highlight of the test. Where are the days when flying changes seemed hard for a 6-year old?

So why didn't he win? The walk pirouettes weren't correct enough and the final extended trot could have been performed with more risk; at least that is what the judges thought.

Maybe looks do kill, in the literal sense than, and Wambo lost his first place because he's just not a pretty horse. Overall, Wambo should have shown more suppleness in the body. His beat is like the running of a Swiss watch, but due to his massiveness he is a tiny bit deprived of flexibility. Trainingwise this horse is definitely on the road to FEI. We love to see him again soon.

Samba Hit Looks Up to His Big Sister 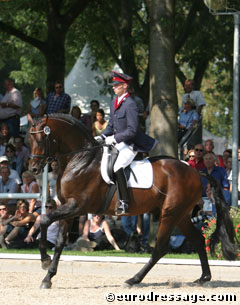 You'd expect the young, innocent sister to look up to the older brother. With Poetin and Samba Hit it's the other way round. Poetin, now seven years old, is the older sister who has paved the Bundeschampionate way for her full brother, the licensed Brandenburg stallion Samba Hit.

In 2001 Samba Hit was reserve Bundeschampionate champion as a three year old (Poetin won as a 3-year old), this year he placed third in the 6-year old division (Poetin won) under Christian Flamm.

Once again Flamm did an excellent job in presenting this actively moving dark bay stallion. The trot tour was dynamic and engaged while the horse stayed relaxed in his body. The left half pass should have been more parallel, the right half pass was wonderful. Samba Hit showed a glorious canter tour with huge, scopey strides. The fourth flying change was late. In the walk, the stallion should have shown more overtrack by working from behind through his back. He was not covering enough ground. Albeit, Samba Hit (by Sandro Hit x Brentano II) showed three very good goods with good engagement and rhythm. He received 8.6 from the judges.

Charming and Ideal Tie for Fourth 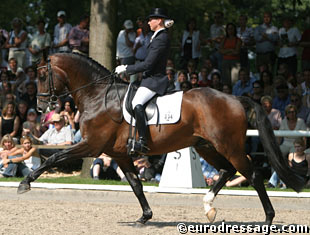 Two horses tied for fourth place in the 6-year old division at the 2004 Bundeschampionate. They were Charming, a Rhinelander stallion by Champus x Lancer II, and Ideal, a Baden Wurttemberger gelding by show jumper Iberio out of a Fierant dam.

Dutch rider Susanne de Klein, who is based in Warendorf and riding for owner Dirk Haese, presented Charming, a stallion who placed third last year under Ingrid Klimke. De Klein ensured that this performance would be repeated and put the horse in fourth place on the score board.

Charming is well muscled and showed much freedom in the shoulder and knee action. His canter was the most appealing gait, naturally uphill and showing four nice flying changes of which the third was cleverly ridden by De Klein (she waited long for the right moment). The judged made one negative remark about the extended trot. "He should move the hindlegs more under the body towards the gravitational point," Hess explained. Their score of 8.5 placed them fourth

In the prize ceremony, Charming had to stand next to the bay gelding Ideal, as both horses tied with an 8.5 mark. Ridden by Dr. Ulf Möller, Ideal is not a flashy horse, but stands out by his solidity in the exercises. Ideal's best gait is without a doubt the canter: very uphill and engaged. The judges remarked that the horse had to be straighter in the body in the extended canter, and this was also to be said of the trot at the beginning of the test. The final transition from canter to trot was a bit hesitant. Nevertheless, Ideal was ridden with much expression and rhythm. 8.5 was a fair score for Möller's classy ride.