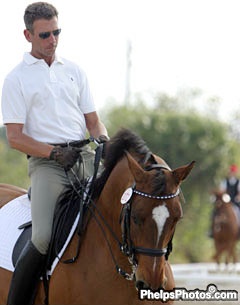 Though Israelian dressage rider Oded Shimoni qualified as an individual rider for the 2004 Olympic Games, The Israelian Olympic Committee has refused to let the American based Grand Prix rider participate in the Games.

The Israel Olympic Committee's appeal committee turned down dressage rider Oded Shimoni's appeal to be included in the Israeli squad for the 2004 Olympic Games.

Shimoni had been preparing himself for the Games in Germany with trainer Hubertus Schmidt.

Due to Israel's withdrawal, France gained an additional individual spot, which is filled in by Julia Chevanne-Gimel on Calimucho. She's joining Karen Tebar on Falada at the Markopoulou Equestrian Centre for the Dressage Olympics which start August 20, 2004