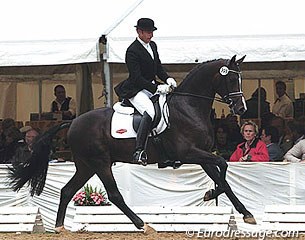 The Hanoverian Verband has selected the 3- and 4-year olds that will represent the Hanoverian breed in the Riding Horse Tests at the 2004 Bundeschampionate, the German Young Horse Championships, in Warendorf, Germany.

Two Hanoverians qualified without having to go through the selection procedure because they won a medal at last year's Championships. They are Donnerhall Junior and Rusty. The chestnut stallion Rusty, owned by Gestut Sprehe, was ridden by Julia Katharina von Platen last year, but will now be competed by Trophy Magnet Holga Finken.

Including in thethe 3-year old Hanoverian stallion group is also Rosentanz, the dark bay licensed stallion by Rohdiamant x Sao Paulo, who was a premium stallion and the auction price highlight at the 2003 Hanoverian Stallion Licensing. Owner Lone Boegh Henriksen is ecstatic about Rosentanz super 2004 show season. "He was reserve champion at the licensing in Denmark and he won the 30-day Stallion Performance Test in Munster. Now he qualified for the Bundeschampionate. It's been a great year," Boeg Henriksen said. Rosentanz only started breeding in June but has already covered more than 70 mares in two month's time. The stallion is claimed to be extremely fertile, as almost every mare and even the problem-cases have proven to be in foal after using the first dosis.

The selected Hanoverians are: