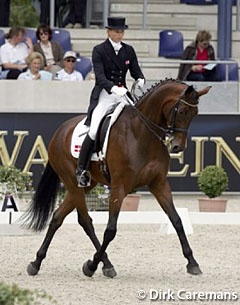 The deadline to name the official Olympic teams was Monday July 19, 2004. On that day, Danish team trainer Rudolf Zeilinger announced that Lone Jorgensen will be the fourth Danish team rider for the 2004 Olympic Games.

Per Sandgaard on Zancor and Andreas Helgstrand on Blue Hors Cavan qualified a couple of months ago and Jon Pedersen on Esprit de Valdemar wa added as third member on the team in June.

Following the show in Aachen, Zeilinger decided to take up Lone Jorgensen on her 9-year old Oldenburg bred Grand Prix horse Ludewig G (by Landfriese x Ibikus/T) as fourth member of the team.