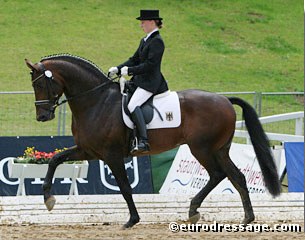 Finishing second in the 5-year old division at the 2004 World Champion for Young Dressage Horses was the Rhinelander bred stallion FS Lord Loxley.

Under Jana Freund, the most successful Bundeschampionate rider to date because of her multiple pony victories, FS Lord Loxley danced to a deserved silver medal.

While Florencio was a picture of suppleness and elasticity, FS Lord Loxley stood out with his power in all three movements. The beat, cadence and rhythm of his movements was impressive. More importantly, his huge lofty gaits were also collectable. In the first round, Lord Loxley, who is by Lord Sinclair x Weltmeyer, finished third with 9.04 points, but in the finals he improved his act and scored 9.14, earning him the Reserve Champion's title. 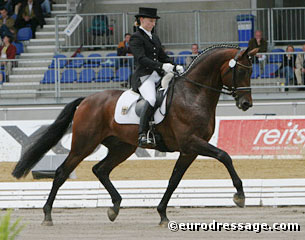 Bred by the Belgian Gestut Sonnehof and owned by Josef Wilbers of Ferienhof Stücker (FS), Lord Loxley was praised by the judges for his active, uphill trot, excelling especially in the medium trot. The bay licensed stallion's canter was very uphill and groundcovering and his walk was forward and through. As a negative point, the judges remarked that the horse was sometimes a bit stiff in the left bend.

Very remarkable was the way in which Lord Loxley was presented by the young Jana Freund. Located in Weeze, Germany, Freund is in her mid twenties and not the tallest rider. Nevertheless, she manages to ride power house Lord Loxley with finesse and lightness. Eurodressage wouldn't place any other horse in second place than Lord Loxley.