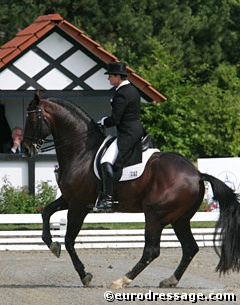 The CDI Hagen served as qualifier show for the American Olympic Short listed Dressage riders. For Debbie MacDonald and Robert Dover the dice has been cast, but Guenter Seidel needs to decide which horse to pick

(Nikolaus or Aragon) and the fourth place is still open for discussion.

Steffen Peters, Leslie Morse and Lisa Wilcox are the candidates. It seemed normal that Wilcox would take the spot, but as Relevant has not been out in the show ring since February 2004 and still has not showed his worth for the American team this year, Morse and Peters see light at the end of the tunnel.

Therefore, it was a bit of a surprise that Leslie Morse became the grand Grand Prix winner at the CDI Hagen, and not Seidel on Aragon or Peters on Floriano. Kingston was on the aids, fit and fresh in Hagen and put down two impressive rides. In the Grand Prix, Morse scored 72.83% and won the class ahead of Seidel and Peters. In the Freestyle, the Paragon Farm pair reigned supreme with 76.175% leaving the number two ranked rider Carola Koppelmann (72.175%) far behind her. 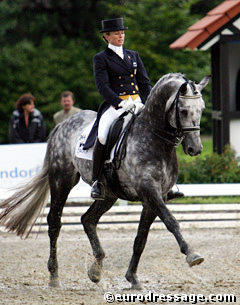 Steffen Peters and Floriano (by Florestan) were unfortunately eliminated after the pair had ridden a triple pirouette. Pirouettes are one of Floriano's fortés, so Peters must have got caught in the moment but lost count. He finished his ride, got applause from the crowdn yet did not receive a score.

Though Wilcox was registered to compete Relevant in Hagen, it was the dapple grey licensed stallion Royal Diamond she had brought to the show. Royal Diamond looked in shape and Wilcox had to carry out only few minor corrections in the test, but one cannot deny that Royal Diamond is only half the horse Relevant is, lacking that power from behind and bit of extra brio Relevant so beautiful reflects.