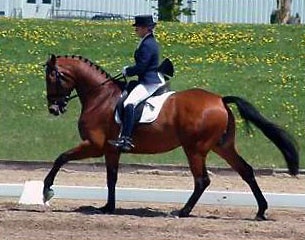 Dressage Canada has selected the horses which will represent Canada at the 2004 World Championships for young dressage horses in Verden, Germany, July 9-11, 2004.

In the 5-year old division former Canadian Olympic team rider Evi Strasser will be riding Foto Tyme, a Westfalian gelding by Florestan x Delphi, who she has known as a foal and purchased in Germany from Ullrich Henschke.

Strasser has been enjoying much success with Foto Tyme at CDI competitions this year including sweeping the 5-year-old division at the CDI*** Wellington, Florida and CDI*** Port Jervis, USA and the CDI*** at York Equestrian Centre, Ontario with scores in the 80's.

More recently the pair competed at the CDI*** in Blainville, Quebec June 30 – July 3 where the international judging panel rewarded their efforts with an incredible 87.6% giving Foto Tyme a mark of 9.5 for his walk, 9 for rideability and 9 for presentation.

"I love his straightforwardness, his trust in the rider," Evi Strasser said, "he has until
now sticked with me even when he was confrontad with a lot of scare things. At the last show the door of the judges' booth opened and all the paper flew in to the ring during my medium canter. The bell rang and 5 people stormed into the the ring to gather all the papers which are by now flying under his leg and over his head. I thought that would be it, but he just stood there and was looking around him. Then we started again our canter tour and finished the test."

“I'm looking forward to representing Canada with Foto Tyme.” said Strasser, who has previously ridden at these Championships with her now Grand Prix mount Quantum Tyme, achieving a 4th place in 2000. “He is a super showman and because of that I feel confident that we'll do a good job in Germany.”

Representing Canada in the 6-year-old division is Gillian Duke with Florianus, a Westphalian stallion by Florestan I x Damenstolz, and owned by Ingo Pape. A former Young Rider representing Ontario, Gillian has been in Europe for the past three years, first completing her National “A” Trainer's Certification at the International Academy for Equestrian Studies and presently working at the renowned Hengststation Pape in Germany where she prepares and competes with their young horses and stallions. Duke has been enjoying much success in Europe competing in the FEI Young Horse classes against her European counterparts. She had previously prepared Florianus for his performance testing and has shown him at the Stallion Galas in his four year old year.