UB40 In Training with Mischa Koot 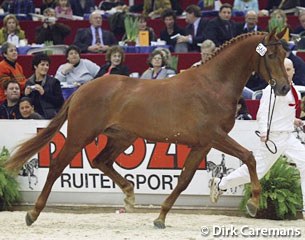 , which immediately followed the annual KWPN stallion licensing in February, selling for 145,000 euro to Wim Zegwaard.

At the end of May 2004, UB40 (by Olivi x Michelangelo) also became the winner of the KWPN 30-day stallion test in Ermelo scoring 8 for walk, 8.5 for trot, 8 for canter and 8.5 for dressage suitability. UB40 is up for stud at De Dalhoeve in Wamel, The Netherlands.

Rider Mischa Koot recently joined Tineke and Joep Bartels' Horse Academy team as a rider and instructor and is training the chestnut stallion at that facility in Hooge Mierde, The Netherlands.