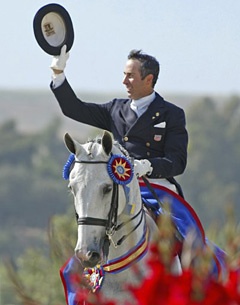 Robert Dover did it again today and in some kind of style, Freestyle to be exact, with a score today of 81.70 in the Bayer/USET Foundation Festival of Champions presented by State Line Tack.

The competition was the 2004 Olympic Dressage Trials and also determined the USEF Grand Prix National Championship.

The big story of these Trials wasn't just Dover, it was also the overall quality of the performances during the entire trials, capped off by the excellent Freestyle rides today. Veteran “O” Judge Axel Steiner was commenting via headsets for the spectators and said, “It's the largest and most enthusiastic crowd we've had in this country in my 30 years of judging. This is the best competition we've had in this country.”