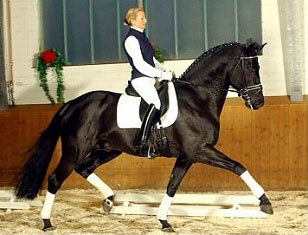 Wilcox received an entry ticket to this event throught her number 6 place in the FEI/BCM World Rider Ranking.

All riders ranked in the FEI top ten are allowed to bring a horse to the World Championships without having to perform at the required national qualifiers.

"We haven't decided yet which stallion we'll take to the Championships," said Vanessa Huck, the spokesperson of Gestut Vorwerk.