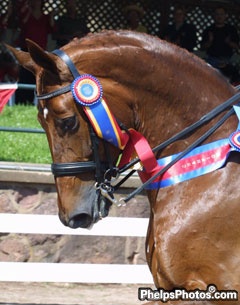 Named as Discretionary Selection to the Short List for the 2004 Olympic Games Dressage Team, Debbie McDonald and Brentina will be allowed to sit out the Selection Trials to give Brentina

The Committee on Selections of the United States Equestrian Federation, Inc. (USEF), has approved the unanimous recommendation of the Dressage Selectors, and of the Dressage High Performance Committee, to name Debbie McDonald of Hailey, Idaho, to the “Short List” for the 2004 Olympic Games Dressage Team.

According to the USEF Dressage Athlete Selection Procedures, it is possible for a horse/rider combination to be named to the Short List by the selectors without competing in the Olympic Selection Trials.

To be considered as a discretionary selection, the combination must have been ranked in the top four in the USEF Grand Prix Rankings by June 6th, the conclusion of the qualifying period for the USEF Olympic Dressage Selection Trials. McDonald and Brentina are currently ranked #1. The Dressage Selectors, with the advisement of the Chef d'Equipe and coach must ascertain that by the combination not being named to the Short List as one of the top three, it would have a direct bearing upon obtaining the best qualified team for the Games.

A slight strain to Brentina's tendon after CDI*** Dortmund in March has been conservatively treated with light work. Although she is sound, her veterinarians believe the best course is not to jeopardize her recovery in preparation for the 2004 Olympic Games by competing in the Selection Trials.

“Over the past several years Debbie and Brentina have clearly demonstrated their ability in both the United States and in international competition. They have earned the opportunity to compete in Athens and are very valuable to our team medal chances,” said U.S. Dressage Coach Klaus Balkenhol.

Dressage fans hoping to see the number one rated horse and rider team going into thie selection Trails in San Juan Capistrano, will more than likely get a chance during the finals awards ceremonies, if Balkenhol give the OK, Brentina and Debbie will join her fellow team mates for a round of honor.

This year they were first at CDI*** Dortmund, Germany and first at the U.S. Freestyle Championships/U.S. League Final. In 2003 the pair became the first U. S. combination to be named the World Cup Final Champion. That same year they helped the U.S. Nations Cup Team at CDIO Aachen place second where they placed third individually. In 2002 they were members of the Silver Medal Team at the World Equestrian Games where they were also fourth individually; and finished first at multiple events including the U.S. Freestyle Championships/U.S. League Final, and the USET Grand Prix Championship/World Equestrian Games Selection Trials at the Festival of Champions.

Brentina is owned by Mr. and Mrs. Parry Thomas of Sun Valley, Idaho.