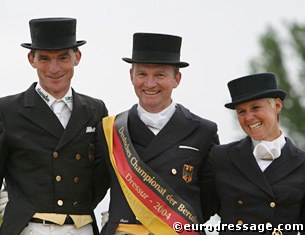 The German Professional Dressage Riders Championships consists of three tests, a Grand Prix and Special on one's own horse and a final with horse change. Only three riders can qualify for the Finals in which they have to ride a short Grand Prix on their own horse as well as on the horses of the two other finalists.

Schmidt excelled on all three horses. Aboard his own 10-year old Hanoverian Motown, Schmidt scored 1146 points, with Zeilinger's The Lion King B he got 1244 points and on Graf's Duvalier, he rode his best test with 1280 points in total.

Despite severe weather conditions, the show never lost its flair and was the right setting for the Championships. In 2003, Dolf Dietram Keller and the licensed breeding stallion De Niro won the Championship.

Hubertus Schmidt runs a fantastic training facility in Borchen-Etteln, near Paderborn, where he is currently preparing Olympians Oded Shimoni and Dr. Cesar Parra for Aachen and the Olympics. Schmidt still has a chance to qualify for the German Olympic Team if he puts in a stellar performance at the CDI Aachen in two weeks.

In the past, Schmidt has trained with Siegfried Peilike, Jean Bemelmanns, Dr. Reiner Klimke, Harry Boldt, Albert Stecken and Rudolf Zeilinger. He currently is trained by Klaus Balkenhol.

Zeilinger Put to the Test, a Bit More than the Others

Placing second at the 2004 German Professional Dressage Riders Championships was Rudolf Zeilinger. He and Hubertus Schmidt were in a neck to neck race, turning the horse change finals into an exciting thriller. In the horse change finals, the professionals get only 10 minutes' preparation time before they have to ride the Short Grand Prix. It is very interesting to see how differently the horses perform under each rider.

Zeilinger, who is a Willi Schultheis' student, and puts a lot of emphasis on the seat and invisibility of the aids, rode superb flying changes with Motown, while Hubertus Schmidt made an error in the tempi's on his own Motown. In the piaffe and passage, on the other hand, Zeilinger kept Motown a bit above the bit, making the piaffe look not round enough and through the back. Aboard Duvalier, Zeilinger showed a fantastic piaffe passage reprise.

Although the horse change finals was blessed with bright sunshine, the second Championship qualifier on Saturday took place in very different weather conditions. The sky was constantly overcast with regular precipitations messing up the party, but when Zeilinger and The Lion King B entered the ring for the Grand Prix Special torrential rains hit Hof Kasselmann. It was impossible to ride a test.

Zeilinger and The Lion King had to leave the arena in the middle of a thunder and rain storm, only to reappear 15 minutes later in a mud pool ring for his test. The crowds, which were packed like Guatemalans in a car underneath the white tents around the ring, cheered Zeilinger to victory. Not only did he ride the best Special of the day (69%), but he earned the sympathy of the crowds by having to compete under such extreme conditions.

When Zeilinger was interviewed on the podium during the award ceremony he said that he had had much fun at the show and that it was an interesting competition, but added, "I'd like to have won anyway."

Zeilinger has one of the most beautiful barns in Germany and is located in Emsburen, where he trains Elke Kampmann, the Danish Olympic Grand Prix dressage team, Michelle Gibson and several other renowned riders.

It was a weekend of firsts for Uta Gräf and Duvalier. Riding her first Professional Dressage Riders Championships, her first Grand Prix Special in her life, and taking first place in the Grand Prix in the first qualifier of the Championship, Uta Gräf could do nothing else but smile this weekend in Hagen.

Gräf has the good fortune of having the ride on Duvalier, a dark bay Hanoverian gelding by Davignon x Bolero. Duvalier won the 1997 World Young Dressage Horse Championships in Verden under Holga Finken and has been trained to Grand Prix level by Finken.

For one year, Gräf has been training Duvalier and the combination clicks perfectly. Gräf has a beautiful seat with low, soft and quiet hands and her legs give the aids invisibility. It's a beautiful picture to see her ride such a talented horse as Duvalier.

In the first round of the Championships, Gräf won the Grand Prix with 67.41%. In the Special she placed second with 68.36% and in the finals she won the bronze medal. Though Gräf scores 1246 points on her own Duvalier, the other professionals scored even more with her horse.

When asked if Gräf was disappointed by the fact that she scored the lowest mark on Duvalier she said "no" right away. "No, I'm not disappointed. Rudolf and Hubertus have so much more experience than I do and I'm just very happy that my horse is the nicest one of them all," Gräf joked. During the award ceremony, Duvalier got a laurel for being the best scoring horse of the horse change finals.

Uta Gräf is located in Weisenheim near Frankfurt and trains with Ellen Bontje. Though she is an up and coming professional in Germany, she already training an interesting group of clients, amongst them the 2003 German FEI Pony Champion and 2003 European Pony Team gold medallist Patricia Höhn.