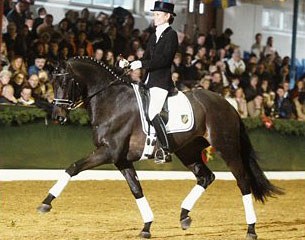 A very strong group of 6-year olds was presented at the Bundeschampionate Qualifier in Wedel, Germany. Winner of the class, with an impressive 9.0 score, was Petra Wilm aboard her Trakehner

The black King Arthur (Buddenbrock x Consul) was presented at the licensing by Hubertus Poll and became the 2000 Trakehner Licensing champion. Petra Wilm, who is the president of the German Trakehner society, purchased the horse in the auction for 150,000 euro. In 2003, King Arthur was also honored as the Champion of the Danish Warmblood Licensing. Not only did Wilm and King Arthur qualify for the Bundeschampionate, but it will also represent Germany at the World Young Horse Championships and can be considered a medal hopeful.

Christop Koschel competed two horses in Wedel but was only able to qualify Diorama. The pair placed fourth with 8.10. Diorama is an Oldenburg bred bay stallion by Donnerhall x Pik Bube I. Last qualificant for the BuCha was Swedish Karin Oljemark aboard Ricardo da Silva. They scored 8.0.