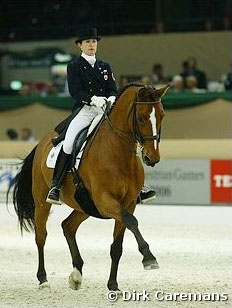 Belinda Trussell and her 14 year old Oldenburg gelding, Royan ll, head back to Canada next week to compete in the country's Olympic trials, to be held at the end of June and beginning of July in Ontario and Quebec.

The 32 year old Trussell arrived in Germany in January to train with compatriot Christilot Boylen in preparation for the World Cup and quickly made her mark in a number of competitions over the next few months.

“I am so fortunate to have been able to stay in Europe to train and compete these past few months,” noted Trussell.  “I have been so encouraged by the positive response to Royan and myself and hope to return here many times over the next few years.”