Lisa Wilcox On the Road to the Olympics 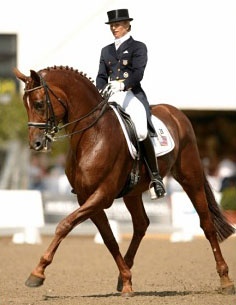 The road to the Olympics is probably the hardest for American dressage rider Lisa Wilcox. Based in Germany as chief rider of the Gestut Vorwerk stallion, Wilcox can not travel to the United States

to ride the obligatory selection trials to qualify for the American Dressage Team that will be sent to the 2004 Olympic Games in Athens.

Instead, Wilcox has to qualify her number one horse Relevant in Europe by scoring an average 2% higher than the best fourth placed American at the American Olympic Selection Trials, which are held in San Juan Capistrona, California, in June.. Furthermore, Wilcox has until June 1, 2004, to collect her scores for an average mark.

At the 2003 European Championships in Hickstead, England, Wilcox already scored 77.042% in the Grand Prix, finishing second. Though Wilcox has more great scores from competitions in Europe, she has one more chance left to go for it and claim that second top score. Wilcox and Relevant will be competing this weekend at the CDI Wiesbaden in Germany.

The American Equestrian Federation (USEF) is very strict about these qualification rules and will make no exception for Germany's most loved dressage rider, which is a native American. "The regulations in the U.S. are very strict, " Wilcox said, "only that what is written black on white will count. The Federation has already lost so many lawsuits; people in the U.S.run to court really easily."

Wilcox scheduled the Derby in Hamburg or the CDI in Munich as part of her competition plan, but decided not to compete there eventually. At the CDI Norten Hardenberg, she showed her second Grand Prix horse Royal Diamond in the Grand Prix, scoring 70.08%