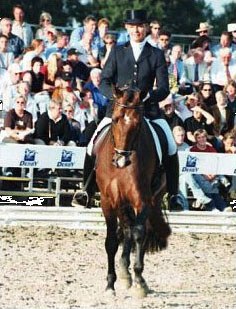 , which gave her the lead over large group of talented combinations. Traurig's bay stallion is by Lanciano out of a Donnerhall mare. The pair already competed at the 2003 Bundeschampionate in the 4-year old Riding Horse Stallion class, in which they finished sixth overall.

Jana Freund and Joseph Wilbers' FS Lord Loxley (Lord Sinclair x Weltmeyer) placed second with 8.5. The combination ranked fourth at the Bundeschampionate Finals in 2003 and is ready for the big time this year in the 5-year old Dressage Horse division. Victorywise, Freund is to date the most successful Bundeschampionate rider .

Most interestingly finishing in third position (8.4) were Dr. Ulf Möller and the Oldenburg mare Destination (Don Gregory x Rubinstein). Destination was purchased by PSI at the Vechta Spring Elite Auction only two weeks ago, and the mare has now qualified for the BuCha. "Normally we would give her some rest right after the auction, but the idea was to qualify her early in the season, so she would have plenty of time to recouperate and be further trained," Dr. Möller explained. "Destination is very easy to ride, very uncomplicated," Möller added. Vechta Auction rider Johannes Westendarp attributed exactly the same qualities to this beautiful bay mare when he was interviewed by Eurodressage in Vechta. 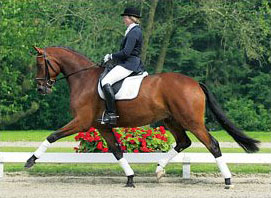 Jutta Verlage and her Oldenburg mare De Layla (De Niro x Romancier) ranked fourth with 8.2, while Christian Gesing and his Oldenburg mare Ravienne (Rubinstein x Freiherr) finished in fifth position with 8.0. Equalling that score were Dr. Ulf Möller and the Oldenburg Lord of Dance (Lord Sinclair x Rouletto). Lord of Dance was a 2002 PSI auction horse selling for 220,000 euro. He is back with P.S.I. to aspire an international dressage career. At the first show in his life, Lord of Dance immediately qualified for the championships.

At two qualifiers in two weeks time (Bremen and Wickrath), Dr. Ulf Möller remarkably qualified four out of six horses for the Championships. Landscape, a 5-year old Lord Sinclair x Ramino did not make the cut. "He's a very good horse for the future, but still a bit spooky . It was only the second time that I rode him," Möller said. His second not-qualified horse was the elegant Lady Royal (Longchamp x Grand Royal) who unfortunately bit her tongue during the ride and had to be withdrawn. 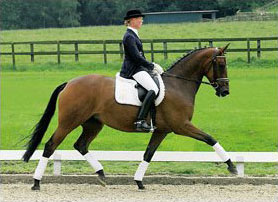 When asked how many horses Möller can take on his plate for the Bundeschampionate, he replied "too many horses is not good. It's too difficult to manage. It requires a lot of organisation to compete your horses there and you can't concentrate if there are too many. I'll qualify a bunch now and then at the end I'll decide which ones I am going to take with me."

Only two 6-year olds scored above 8.0 at the trial in Wickrath. Winner of the class was Bernd Nöthen aboard the Hanoverian Waikato (Weltmeyer x Airport) with an 8.3 mark. The judges placed Danish rider Fie Skarsoe aboard Rhinelander breeding sire De Beers (Donnerhall x Damenstolz) second with an 8.0.