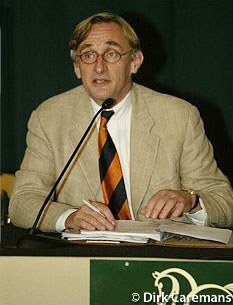 After 19 years of being the World Cup Director, Joep Bartels has decided to resign from this position. Together with Mariette Withages, Joep Bartels made the kur to music popular by introducing it at the big shows in Europe

. "When I started doing the World Cup, there were ten people in the stands. Now it's a full house. Last week at Indoor Brabant, dressage was even more popular among the crowds than show jumping," Bartels said.

However, Bartels wants to move on to newer things. "I'm a pioneer. Nobody needs me anymore in this sport. There are plenty of other things to do," he commented. At his home in Hooge Mierde, The Netherlands, Joep Bartels runs a large dressage facility with his wife Tineke Bartels-De Vries and daughter Imke Schellekens-Bartels. Bartels' barn is also known as the Horse Academy, where innovative educational projects are being held such as te Global Dressage Forum. Bartels has decided to apply himself more to that field.

Besides taking up a position at the Technical School in Den Bosch as an equine studies teacher, Bartels will also be digging into politics, communication, and economics. "I want to apply myself to the qualitative improvement of communication between equestrian business and local authorities, " Bartels stated. "City limits are coming closer to the country side, and it will be important for farmers to communicate their wishes and ideas about how their businesses can grow as well." Way to go Joep!!