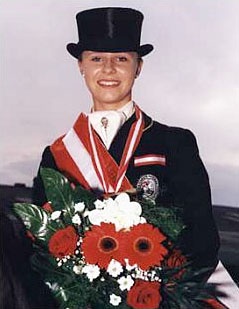 Victoria Max Theurer is one out of 10 riders who has individually qualified herself for the 2004 Olympic Games in Athens. Following in the wake of Colombian Dr. Cesar Parra and Israeli Oded Shimoni

, the Austrian Victoria Max Theurer is the third rider to won an Olympic berth this year.

At the CDI Dortmund, Theurer scored 68.17% in the Grand Prix with Agrigento, and scored above the required limit to qualify for the Games. Furthermore, Max Theurer improved her act by putting 71.24% on the score board in the Dortmund kur to music.

Victoria Max Theurer is 18-years old and is one of the youngest dressage riders ever to compete at the Olympic Games. Victoria started riding at a very young age. "I was always with my parents at the shows, therefore I have always been in the horse world," she said.

She very much looks up to her mother, Elisabeth Max Theurer, who was the 1980 Olympic Dressage Champion, "because she had a lot of success. She is always relax, calm and "collected"!"