The Verden Tournament Festival Has A New Concept 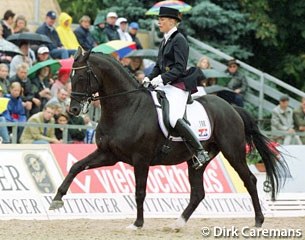 This year's World Breeding Championship of Young Dressage Horses will have a new concept. From July 9 to 11, not only the dressage tests in the arena will attract everybody's attention, this time the Verden event

is rounded off by international show jumping competitions.

The Organizing Committee of Verden (VTG) together with the Hanoverian Association and the district riders' association presented the new concept which will attract active riders as well as visitors from all over the world.

The specialty of the event from July 9 to 11: the advanced level show jumping competitions in three different categories: the youngster-tour for seven- and eight-year old horses, the medium and the advanced level tour. German as well as top-class riders from abroad will have the chance to compete immediately before the International Aachen Horse Festival will start as well.

For dressage sport, the four-legged stars of all age-groups will compete again. Three-and four-year old riding horses will fight for the ticket for the Federal Championships in Warendorf. The World Championship of five-and six-year old dressage horses will once again be the highlight, and the international importance of this category is increasing year by year. The competitions for seven-to nine-year old horses are at the same time the qualification for the Nuremberg Cup Finals, the unofficial, but highly prestigious German Championships on Prix St. Georges-level. The highest dressage level, the Grand Prix de Dressage, is another admired highlight, followed by the Grand Prix Special and the popular Grand Prix freestyle.

The entrance fees will be reasonable during all days. On Saturday evening, the entrance will be free, and there will be a show program including fireworks over the renowned Verden stadium.