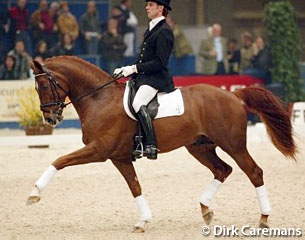 No surprises in the Finals of the 2004 KNHS/KWPN Stallion Competition in 's Hertogenbosch, The Netherlands. Scandic and Ro-Lex, two mounts who already dominated the qualifiers with much greatness

, fulfilled their roles as favorites for the title by reigning supreme today in the Brabenthallen.

Winner at L-level was Scandic (Solos Carex x Amiral) who was professionally presented by Remy Bastings. Although the chestnut stallion was very frisky at the beginning of his test, he was able to excel in his trot and canter work. For his walk, which was a bit tense, he scored 6.5. Judge Cor Loeffen especially praised Scandic for his trot, which showed much front leg usage, shoulder freedom and knee action, received a 9. In canter, Scandic showed suppleness and purity of gait: 8.5 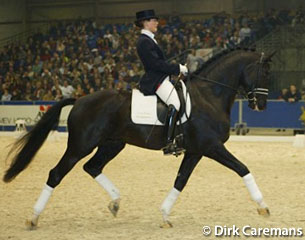 2003 Pavo Cup Winner Special D (Metall x Zandigo) finished second under Sarah van Fessem. Although Special D showed nice rhythm and balance, there was some tension in his gaits. Special D earned an 8 for his walk, an 8 for his trot and a 7 for his canter. Edward Gal ended in third position aboard San Remo, a Wolkentanz x Volturno offspring. San Remo received a 7 for his walk, an 8 for his supple trot and a 7.5 for his canter. In fourth place were Nathalie Smeets and Skydancer (Florestan x Peter Pan), while Willem Jan Piggen ranked fifth with Son de Niro.

M-level winner was Hoomark's Ro-Lex, a bay stallion by Montecristo, who made an incredible break through on the Dutch dressage scene by defeating Reserve World Champion Hilltop Rousseau twice in a row at the KWPN qualifiers. As Hilltop Rousseau was withdrawn from the Finals due to an injury, nobody could threaten Madeleine Vrees and Ro-Lex for the Finals' victory. Ro-Lex showed much rideability and technical perfection in his test. 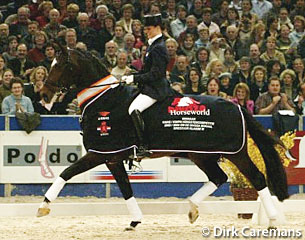 In the absence of Painted Black, the bay stallion Prestige VDL easily strode to a first place at Z-level. Prestige VDL is a Silvano N x Goodtimes offspring and was presented by Christa Laarakkers. Finishing second was Dutch Chef d'Equipe aboard his youngster Paganini (by Havidoff). Marlies van Baalen and Wijdewormer's Riant (by Jazz) placed third, followed by Maaike Lassche on Parcival (by Koss) and Alex van Silfhout on the former KWPN Licensing Champion Paddox (by Ferro).