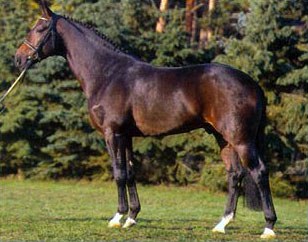 The dark bay stallion Re Primeur has been named Best Hanoverian Stallion Born in 2000. The Hanoverian Verband got an excellent impression of Re Primeur, who was presented with three other 4-year olds to a selection commission in Verden on January 8, 2003.

Annually, the Hanoverian Verband selects the best four year-old stallion. This year, the Hanoverian Verband had to chose from a crop of stallions born in 2000. Four stallions were invited to appear in front of a commission: Re Primeur, For Edition (Forsyth x Leggiero), Hochadel (Hohenstein x Donnerhall) and His Highness (Hohenstein x Donnerhall). All stallions were presented in hand, under saddle and over fences. The judges also took the stallion performance test scores into account in their final decision. It was a big surprise that Re Primeur won the class, defeating licensing champion and highly acclaimed young stallion His Highness. However, Re Primeur is excellently built and showed his top quality potential as a sport horse both in Verden and in his HLP test.

Re Primeur is bred by Horst Quast and is by Rotspon x Wolkenstein II x Pinkus. He finished second at the 2003 Stallion Performance Test in Adelheidsdorf with an overall score of 139.03 points, winning the dressage phase with a high 149.82 points. In 2003, Re Primeur has been trained in dressage by Wolfhard Witte.

Re Primeur is owned by Landesgestut Celle and is up for stud at Gestüt Schmidt in Ankum, Germany, who is also standing Weltmeyer, Brentano II, Londonderry, Likoto xx.