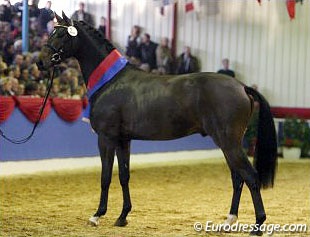 The third and final day of the 2003 Oldenburg Stallion Licensing was a fabulous one. Not only did the Stallion Commission crowned a truly phenomenal colt Champion Stallion, but the ten colts selected for premium were all of a very high standard.

Catalog number 23, the Donnerhall x Kennedy x Karon, who has excelled since day one, deservedly won the Champion's Title of the 2003 Oldenburg Licensing.

Fifty-two horses out of approximately 75 were qualified for the final, fourth viewing on the final day of the licensing. In groups of 9 they were once more shown in hand in trot and in walk. After the presentation of each group, the panel announced the licensed and non-licensed colts, and added which stallion was selected for the premium ring. With more than 3000 visitors filling the stands, tension built up all day, especially when the ten selected colts for the premium ring were being presented. It took the judges' panel, which consisted of Schulze-Schleppinghof, Heckmann, Folkers and Thole, quite a while to make their final decision, but they were very right in placing the Donnerhall x Kennedy x Karon in first position. The dark bay colt was simply best each day and he could not have deserved the title more. 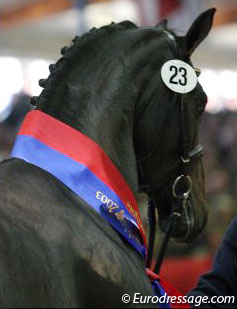 Presented by Paul Schockemohle's Gestüt Lewitz, the Donnerhall x Kennedy is a noble, refined and strong moving stallion with father quality as well as sport horse talent. Judge Uwe Heckmann was extremely pleased with this stallion and said that, "he's very lightfeeted and has interesting and valuable bloodlines. He has excellent gaits, both his walk and trot are superb and he performed consistently throughout the licensing." By crowing # 23 champion, the judges also honored his sire Donnerhall as 2001 was his final breeding year before dying unexpectedly.

Breeder of the 2003 Licensing Champion is Dr. Klaus Michels, a lawyer from Kuddewoerde, Germany, who currently has no more broodmares except one stallion and a foal. The Donnerhall x Kennedy was not presented at auction, as he was sold by Schockemohle to Sarah and Anthony Pidgley of Kilbees Farm in Windsor, United Kingdom prior to the licensing. Of course, the Oldenburg Zuchtverband was extremely upset about the early sale of the "Sieger," as Schockemohle did not give the Verband the credit and business by auctioning this horse. Despite this unpleasant matter, the Pidgley's nevertheless have great plans for their champion's colt. Besides being up for stud, he will be put in training with Holga Finken who will try to qualify him for the 2004 Bundeschampionate. 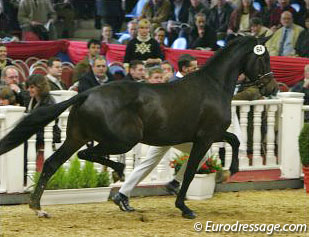 Reserve Champion of the 2003 Licensing was number 64, the incredibly trotting Rubin Royal x Calmiro x Eldorado, bred in Luxembourg by Arsene Weiler and presented at the Licensing by Harli Seifert. The Rubin Royal is an extravagant mover and he received some criticism from detractors that his movements were uncoordinated. Heckmann refuted this immediately by saying that, "he has a great moving mechanism. His transitions from trot to walk were very flowing and when he gets even more strength in the hindquarters, he'll be phenomenal."

Finishing third with an Ic Premium was the number 80, another Gestut Lewitz owned stallion by Sandro Hit x Donnerhall x Feldherr. The dark bay colt was extremely refined and looked very thoroughbredlike, yet moved with great rhythm and balance. "He has one of the best trots I have seen these past few years," Heckmann said, "he only needs to develop a bit more, especially in the croup." 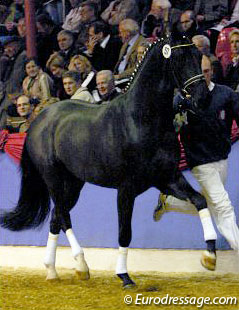 In fourth place with the Id Premium was the # 15, a Diamond Hit x Consul/T x Anduc, bred and owned by Dr Ursula Mittenmayer. The dark bay colt raised varying opinions amongst his viewers: some loved him, others didn't. He is a robust colt with strong movements, but his hind legs could have stepped more under the body in the trot. Nevertheless, there was music in this horse, and he was sold through the auction to Westfalia for 65,000 €.

Most expensive auction horse was the fifth premium stallion, # 57 a Rohdiamant x Rouletto x Montevideo, bred by Paul Rode and presented by Wilhelm Sieverding. The divine black stallion was sold for 90,000 € in a bidder's duel which was destined to be won by his buyer, Paul Sprehe. The ravishing # 10, a De Niro x Ponticello xx x Figaro was the sixth premium stallion out of ten, and was sold to Great Britain for the second highest amount of 75,000 €.

Upcoming Belgian dressage rider Angelique Hostyn purchased two interesting stallion prospects to be imported into Belgium. Gerlinde Reinhardt's licensed black stallion by Sandro Hit x Donnerhall x Caletto I was purchased by Hostyn and her life partner Henri Henraey. Hostyn was extremely excited with her purchase: "it will be the very first Sandro Hit up for stud in Belgium, and he also has Donnerhall and Caletto in his lines. For the Belgian market it's important that the horse can jump too, and this one definitely can!" 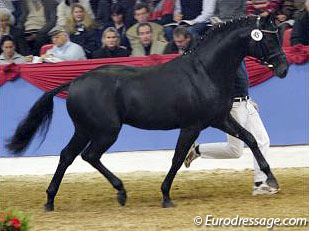 Even more intriguing is Hostyn's purchase of number 45, a pitch black colt named "Liebes Hit." He is a Likoto xx x Rubinstein x Ramino, whose granddam is the mother of World Champion Sandro Hit! "Whenever you see Ramino in a bloodline, you have a horse with sparks," Heckmann said.

The Oldenburg Zuchtverband was very satisfied with the organization of the 2003 Stallion Licensing. For the first time it was being held at the Vechta Centre instead of at the Oldenburg Halle in Oldenburg. Although the Vechta centre can seat less people, the atmosphere is more comfortable and pleasant for both man and horse. The horses no longer felt lost in the ring, and were soothed by the Oldenburg Jungzuchter handlers, who were always in the same places and handled the horses with much professionalism. Furthermore, the stallion licensing committee was very pleased with the good quality of the 2001 crop of colts.