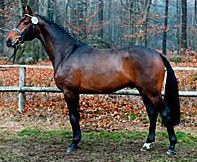 The 16.1 hands high bay stallion was bred by Stefan Kupitz from Brilon-Thülen, and presented at the licensing by dressage rider Elke Kampmann. Dancing Dynamite is by 1998 Licensing Champion Don Bedo out of St. Pr. St. Florin (Fidermark x Worldchamp) and is the full brother to auction horse and licensed stallion Dannemann. Dancing Dynamite will be up for stud at the NRW Landgestut in Warendorf.

Reserve Champion of the licensing was Rüter, a bay 16.3 hh Raphael x Larome x Cor de la Bruyere colt bred by Heinz-Josef Beermann and presented at the licensing by Johannes Rüter from Waltrop, Germany. Ruter has also been leased by the NRW-Landgestut and will be up for stud in Warendorf.

The third placed stallion was the crowd's favorite Don Christobal, a Davignon x Fruhlingsrausch x Froben colt bred and presented by Christoph Schulze-Temming-Hanhoff. Don Christobal will be up for stud at Wilhelm Holkenbrink's in Münster-Albachten.