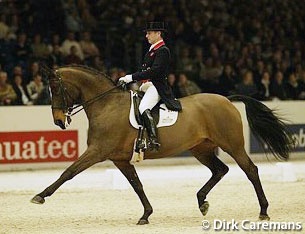 Richard has represented Great Britain at Olympic Games, World Equestrian Games and European Championships, and was a member of the European bronze medal winning team at Hickstead in August. On Saturday Richard and Ballaseyr Royale won the Grange Hotels Grand Prix with a score of 71.08% and on Sunday the pair confirmed their position at the top with a record score of 77.21% in the Mercedes-Benz Grand Prix Freestyle.

Finishing his season in style Richard added silver to his collection in the form of a brand new silver Mercedes-Benz SLK-Class Roadster – his to drive for a year.

However Richard was not the only rider to make it into the record books. Multi gold medal winning Paralympic rider Lee Pearson became the first disabled rider to win an able bodied Championship, winning the Equimax Elementary Restricted Championship with his striking dun gelding Blue Circle Boy on a score of 69.51%.

Barely three weeks after being part of the paralympic team who successfully defended their World Championship title, Lee went on to win the grade 1 section of the Strongid-P Disabled Dressage Rider Championship as well.