World Champion Poetin to be sold at 2003 PSI Auction 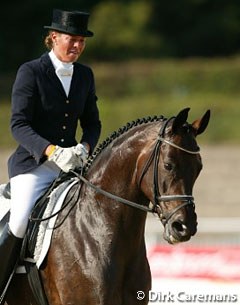 The 2003 World Young Horse Champion Poetin will be sold at the 2003 PSI Auction. The mare has been for sale since the 2003 Bundeschampionate.

In order to get the big bucks for this once-in-a-life time horse, Paul Shockemoele and Ulli Kasselmann have acquired the mare from the Landesgestut Brandenburg and will sell her through their PSI Auction.

Poetin is a 6-year old Brandenburg bred mare by Sandro Hit out of Poesie (by Brentano II) won the 2000 Bundeschampionate as a three-year old and went on to win the reserve champion's title in 2001 and at the 2002 World Young Horse Championships she finished 5th.

2003 has been her biggest year so far. Under Kathrin Meyer Zu Strohen, Poetin won the World Young Horse Championships as a six year old and went on to win the 2003 Bundeschampionate as the high point score champion at the show. PSI will be auctioning this gorgeous mare in December 2003. PSI's co-manager Paul Schockemoele is the owner of Poetin's sire, Sandro Hit.