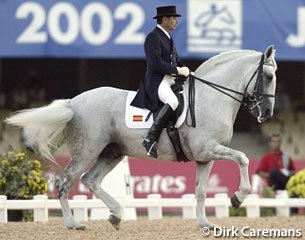 The Spanish Equestrian Federation announced the team that will compete at the 2003 European Dressage Championships in Hickstead, England, next week.

The team is constituted by

The reserve rider is Eduardo Mellado with Hortelano.

Remarkable is the appearance of Ramblas in the team, riding the recently castrated Distinguido. The Andalusian stallion was molested by a groom in January. The stallion has recovered quickly.