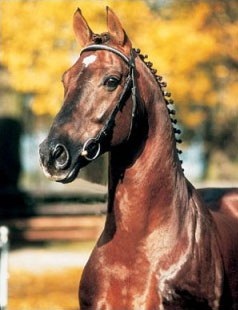 Fidermark, one of the most used stallions of the Westfalian studbook, died unexpectedly in his stall at the Johann Hinnemann's stallion station in Voerde, Germany.

The cause of death is not yet known, but an autopsy will be conducted at the Veterinary College of Hannover.

Fidermark was an 11-year old offspring by Florestan out of Watonga (Werther x Einblick) dam. He was the reserve champion at the 1994 Westfalian Stallion Licensing in Munster and later on won the Stallion Performance Test with 141.74 points. In 1996, Fidermark won the Bundeschampionate in the 4-year old stallion division under Michael Farwick.

Through the connections of Johan Hinnemann, the Westfalian stud offered Fidermark as a ride to Marlies Van Baalen. Under the 23-year old Dutch Van Baalen, Fidermark rose to stardom. Van Baalen and Fidermark qualified for the 2000 Nurnberg Burgpokal Finals. The pair moved to Grand Prix level only recently.

Fidermark had 21 licensed son, amongst which Furst Piccolo, Feinsinn, Fiderwind, and Fiano are most known. Son Furst Fabio was the first get to win the Bundeschampionate in the 3-year old class. Fidermark also sired the auction highlight Farwick, who was sold to Rudolf Zeilinger for 160,000 €.