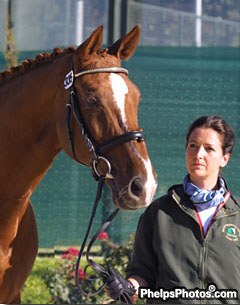 With the 16 year old westphalian gelding suffering from an allergy Merveldt-Steffens will now compete in Hickstead with the 10 year old Hera III. This promising mare had a good result at the Fritzens CDI*** in Austria last month when placing 7th in the Grand Prix Speciale in her first outing at this level.