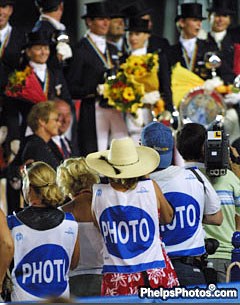 A field in Hickstead is an unlikely site for global communications, but, as journalists from around the world gather there to report on the European Dressage Championships

, high tech preparations are under way to ensure the news gets out!

It is the first time in sixteen years these Championships have been held in Great Britain, and at the centre of the communications infrastructure is Cavendish Communications. A local telecommunications firm based in Newhaven, their equipment and expertise will allow journalists from around the world to file copy and pictures without leaving the showground. Visiting media representatives using both digital and analogue equipment will be able to take advantage of the latest in technology. Although basic facilities such as telephone lines, electricity and water are laid on to the site, everything else including the computers, handsets, fax machines and related equipment has to be brought in, installed and linked up to the high speed ISDN lines and the outside world. Nearly 100 man hours and 700 meters of cable will be used in setting up the press office alone.

Sponsorship Manager, Barbara Ehlers, from British Masters GB Ltd who are running the Championships comments "These days sponsorship from companies such as Cavendish Communications is at the heart of sporting events at every level, world-wide. We are delighted they have chosen to support dressage, not only at this high profile, international event, but also throughout the year at national and local levels. As an expanding, forward-thinking company boasting an excellent track record within the telecommunications industry, their equipment and technical expertise ensures we will able to meet the needs of the many national and international journalists attending this event."

Competitors, grooms and show support staff also benefit from modern technological advances. They will be able to check emails and surf the net by visiting the brilliant, innovative cyber café. Based in the "Chow Tent", and sponsored by internet equine recruitment consultants YardandGroom.com, the cyber café provides a free opportunity to keep up with what's happening at home, whilst swapping notes over a coffee with friends during a well earned break!

Live television coverage of the event is to be transmitted via satellite up-link and will be broadcast across eleven countries, including Holland, Germany, France, Spain and Italy as well as Russia, and the USA. The BBC have said they will televise highlights of the European Dressage Championships during their Sunday Grandstand programme on 17th August, also featuring the British Jumping Derby, together with an hour special covering the presentation of the four days of dressage competitions. Options have also been picked up by satellite sporting networks.

David Goldstrom, Chief Executive of Television in Europe Ltd, specialises in the broadcasting of outside sporting events and will be in charge of TV production at the European Dressage Championships. He comments, "This is the first time we have covered dressage in this country and we will have a crew of about twenty people on site, providing approximately six hours of television coverage over the four days of the competition. We provide live coverage of the events as they happen, which can then be transmitted via satellite up-link anywhere in the world."

Show Press Officer Rachael Holdsworth explains why it is so vital to have good communication resources. "It is important that we facilitate good reporting to ensure a high level of publicity for the sport of dressage and for Britain's ability to host an event of this calibre. Because this is a major sporting event, we will have many more journalists, photographers and media representatives from TV and Radio than usual. Modern sports' reporting requires almost instant availability of news and pictures world-wide, and thanks to the high level of technology we have on site, we will be fully equipped and able to meet these demands."