Doping Case Rusty, a "Slip of the Eye"? 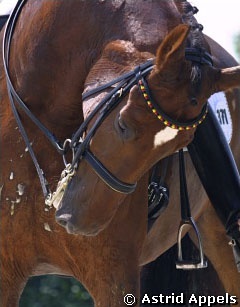 More news on the Rusty doping case is being unveiled. The FEI, the international equestrian federation, claimed that Rusty's blood test indicated 44.2 nanograms of testosterone per milliliter

, while the allowed threshold level is 20 nanograms. According to Salzgeber's lawyer Walz, Rusty carried 4.2 nanograms testosterone in his blood.

The FEI is waiting for the B-test, a confirmation test of the blood sample and urine test that was taken at the World Cup Finals in Goteborg. Walz is confident that Ulla Salzgeber will be riding in the 2003 European Dressage Championships in August.

On 14 March, 2003, Rusty was treated Testosterone-Proprionat for a skin disease Following the lab results of a urine sample taken at the World Cup Finals in Goteborg, Sweden, in April, Rusty has been proclaimed positive to doping by the FEI.