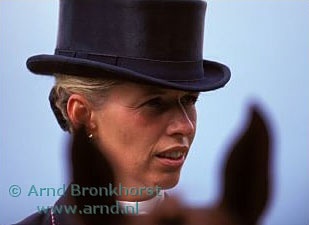 Anky van Grunsven will be competing in the 2003 Dutch Dressage Championships next weekend. Van Grunsven has entered both Gestion Krack C (by Flemmingh) and Gestion Salinero (by Salieri) for the show in Park Brakkestijn in Nijmegen.

Anky has been back in the saddle for only several weeks, and she is already riding three hours a day. Her first ride, since breaking her leg in February, was on 20-year old Gestion Bonfire. Although Anky is still limping when she is walking, riding Krack and Salinero is no problem.

Sjef Janssen took over the training of Anky's horses while she was recovering from the accident. Yet Anky did not entirely disappear from the scene, as she focussed on the training of her students in the meantime. Many of them will be competing at the 2003 Dutch Dressage Championships: Seth Boschman, Christa Laarakkers, Hans Peter Minderhout, Dominique Filion, Tineke Bartels, Anne Franssen, Edward Gal, Joyce Heuitink, Mieke de Kok, Imke Schellekens, Arjen Teeuwissen, Vera Zegwaard; Dominique Filion, Tommie Visser, Sonja Gademann, Stephanie Peters, and Johan Rockx.