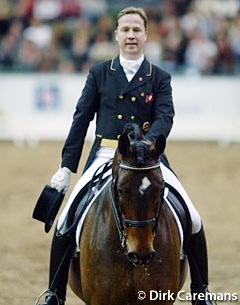 In one way, the 2003 World Cup Dressage Finals were once again an event of which the ranking was highly predictible. With the absence of the top Dutch combinations, the World Cup Finals were a duel between German and American dressage riders.

Ulla Salzgeber fulfiled her steady role of undisputed number 1 and McDonald proved to be the best American dressage diva of the moment. One rider, however, was the fresh breeze in the Scandinavium indoor arena for the Finals in Goteborg, the Swiss Christian Pläge riding the elegent Regent Scoring 68.20% in the Grand Prix and 74.91% in the Kur, Pläge and Regent finished on a 7th place, just behind the strong pack of German and American riders.

Christian Pläge is a German native, but Swiss citizen, and lives with his wife Birgit Wientzek-Pläge in Rüti bei Büren, Switzerland, where the couple runs a dressage stable. The 47-year old Pläge was born in Dusseldorf, Germany, and has his equestrian roots in eventing and show jumping. Slowly his focus shifted to dressage and Pläge became the head trainer at the Hessian State Stud in Dilburg in 1982. Plage travelled to the U.S. and Australia for several training seminars and was mostly known for being a proficient dressage trainer instead of a competition rider. 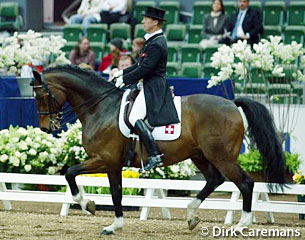 Coaching riders such as Sven Rothenberger, Gonnelien Rothenberger-Gordijn and Eva Senn, and training world famous mount such as Gestion Silvano N, Heuriger, Sappalot, Nektar and Trakehner stallion Maizauber, Christian Pläge decided to put the spotlight on his own career in 2000. Riding the 11-year old Danish warmblood Regent, Pläge has probably discovored and trained the best horse in his career so far. Regent is a bay gelding by Resident out of Lise (by Lagano) and is born in 1992.