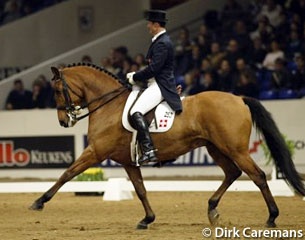 The official list of participants for the 2003 World Cup Dressage Finals has been announced right after the ninth and final World Cup Qualifier in 's Hertogenbosch, The Netherlands.

In the final ranking of the Western European League, Monice Theodorescu was in the lead with Renaissance Fleur, but as her horse broke its leg only four weeks prior to the finals, Germany is sending out Heike Kemmer, Isabell Werth and Gina Capellmann Lutkemeier to the Finals. Ulla Salzgeber is also entitled to compete as she has todefend her title in Goteborg. Sweden will be represented by Jan Brink and its two wild card riders Helena Larson and Minna Telde.

Other European competitors at the Finals will be Marlies van Baalen (8th in the final ranking), Daniel Ramseier (6th-pictured), Richard Davison (9th) and Christian Plage (10th).

Qualified for the finals in the Eastern European League are Russian Alexandra Korelova (pictured left) and Belarussian Iryna Lys. Canada will be represented by Shannon Dueck, Australia by Ricky MacMillan, and the U.S.A by George Williams, Guenter Seidel and wild card recipient Debbie McDonald.